St. Andrew's is committed to graduating young men and women with a deep commitment to their responsibilities as citizens of the world. We express our commitment to sustainability by teaching, living, and working in ways that reflect our ideal of a more thoughtful and sustainable world.

Environmental stewardship on campus is led by a passionate and dedicated group of students, faculty, and staff. Our Green Council and Environmental Stewards ensure that environmental sustainability is a consideration in decisions at every level of School life, whether in our kitchens or on dorm, whether in the organic garden, or on the farthest reaches of our 2200 acres. St. Andrew's has been repeatedly recognized for its sustainability work, and received a Green Ribbon School designation from the U.S. Department of Education in 2013. 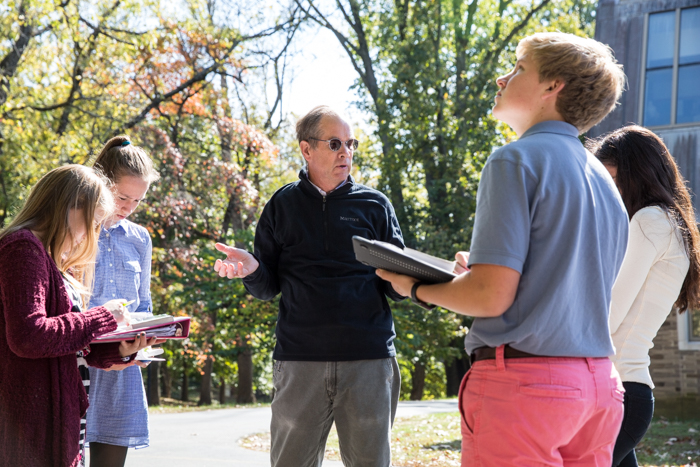 In the 2013-2014 academic year, the Green Council created a Sustainability Plan for the School. The plan sets forth a sustainability strategy for ten areas of School life: curriculum and residential life; climate and renewable energy; buildings and energy use; transportation; water; land use; food and dining; waste management; purchasing and finance; and diversity and affordability. For each area, the plan includes an overarching goal and, if applicable, short (one year), medium (two to three years), and long term (four to five year) priorities.

Over the past several years, St. Andrew's has taken enormous steps towards sustainable living in its green building practices, purchasing habits, and transportation methods. 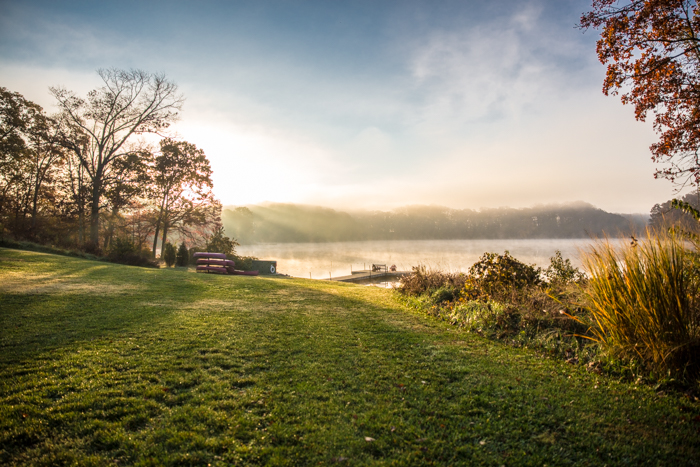 Throughout the school year, St. Andrew’s also offers single stream recycling throughout campus. The Environmental Stewards help the student body terracycle hard-to-recycle items like chip bags, candy wrappers, shampoo bottles, and juice/fruit pouches. Plastic bags and batteries are also collected on dorm for recycling. All food waste from the Dining Hall is composted for use in the organic garden, or used to feed the pigs at Bohemia Lea Farm, owned and operated by Callen Hurtt ’90. Three water bottle filling stations were recently installed on our campus to reduce waste from disposable plastic water bottles. All our construction waste (about 300 cubic yards annually) goes to Revolution Recovery in Wilmington which is able to recycle about three-quarters of the waste its receives.

was estimated to be 5,700 metric tons annually. Transitioning to 100% renewable electricity by 2020 will cut the School's carbon footprint in half. SAS carbon emissions could be reduced by two-thirds by 2026 if we are also able to transition to geothermal heating for our main campus buildings.

In 2014, a group of students led an effort to convert all of Engelhard Hall's 150 incandescent bulbs to LED bulbs. The project cost lest than $2,000, and its first two years, saved the School $2,000 annually in its electricity bills and reduced our carbon footprint by 13 metric tons (the equivalent of taking five cars off the road). Since this first bulb-exchange effort in 2014. St. Andrew's has converted more than 1200 incandescent lightbulbs on campus to LED bulbs.

In addition to efficient lighting, St. Andrew’s installs highly efficient HVAC systems (including one geothermal system for a home on campus), water heaters, and routinely adds insulation, air sealing and new windows in all renovations and building projects.

Thanks to the initiative of a student-led solar task force, in December 2014, St. Andrew's became the proud owner of a 50kW solar array. Students on the task force researched the technology, developed a proposal for St. Andrew’s, received approval by our Board of Trustees, secured major grant funding and helped get donations from our community. (Watch the video they produced to fundraise for the array below.)

The Solar Array currently produces enough energy to power six faculty homes. Annually, it removes 32 metric tons of carbon from our atmosphere, the equivalent to that used by 26 acres of U.S. forests. You can view a live production of our solar array via SolarEdge.

Thanks to a proposal made by students in the fall of 2017, St. Andrew’s will use the savings from the solar array to purchase 100% of the School’s electricity from renewable energy by 2020. 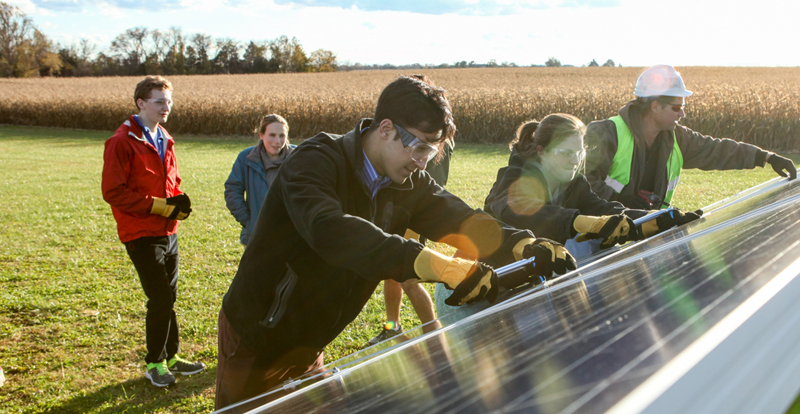 I hope this solar array stands for many years as physical proof of the fact that at St. Andrew's, students and faculty will always be welcome to innovate, to propose ambitious projects, and to challenge the status quo. I hope this array inspires future students to take on enormous challenges with a sense of optimism and confidence.
Luke Baumann '15, Solar Task Force

St. Andrew's campus stands as a monument to the School's long-term dedication to sustainability. For decades, St. Andrew's has worked to promote farmland preservation in Delaware and the Chesapeake Bay area, as these very same areas have traded unique landscapes for generic suburban sprawl, and replaced vast open spaces with rows of shopping centers. By slowly acquiring and protecting our campus of 2,200 acres, we have become a primary source of green space in southern New Castle County. With the rapid destruction of this area's rich farmland, St. Andrew's farms are some of the last remaining portions of the rich, fertile cropland that once was a hallmark of this part of America.

Land Use Initiatives include: 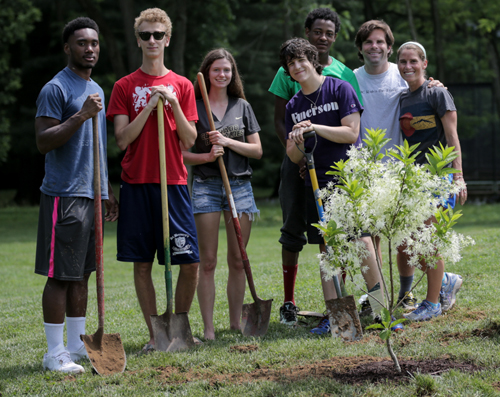 On a Friday evening at the beginning of every school year, students have the opportunity to hear from a prominent environmentalist talk about their life’s work. Past speakers have included: Vernice Miller-Travis, David Orr, Michael Byrne, Michael McGrath, and Joel Salatin.

The following Saturday morning is Pond Day where students choose among a variety of activities intended to invite exploration, reflection, and renewal outdoors on our 2,200 acre campus. Past Pond Day activities have included:

I say, if your knees aren't green by the end of the day, you ought to seriously re-examine your life. 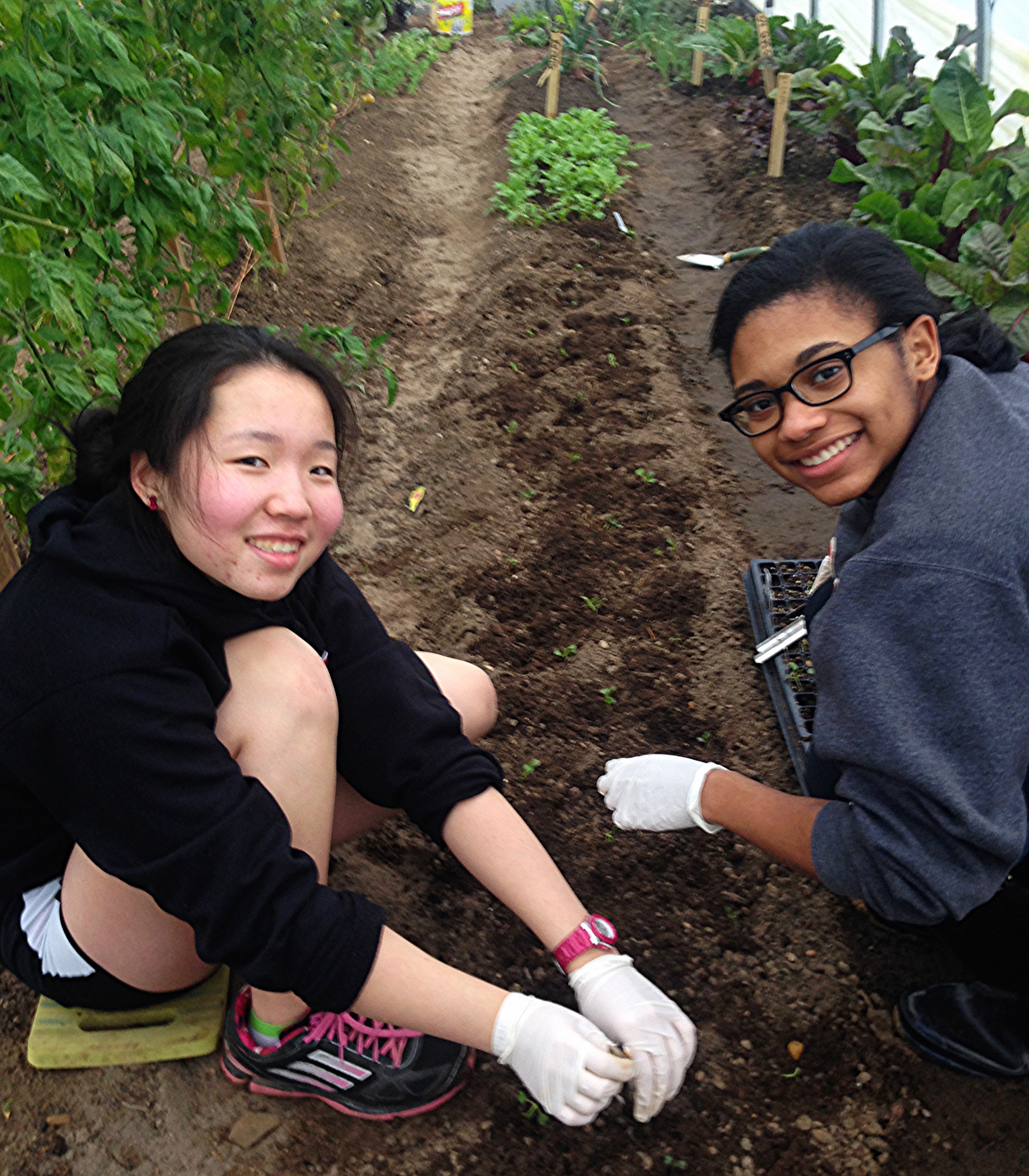 Each fall and spring, students work in our one-acre organic garden to plant and harvest vegetables and flowers for the community. To complete the energy cycle, fruit and vegetable waste from the kitchen is delivered to the garden's compost heap, as well as leaf matter from our grounds. Thanks to donations from parents and alumni, and generous grants from the Rumphius Foundation and the Natural Resources Conservation Service, we have installed a hoophouse in the organic garden, which allows the garden to continue to supply produce to the Dining Hall throughout the winter. The organic garden is located near two small apple orchards. Students have the opportunity to press the apples and make apple cider each fall. Students also help to maintain and extract honey from the School's beehives, which are located near the orchards. 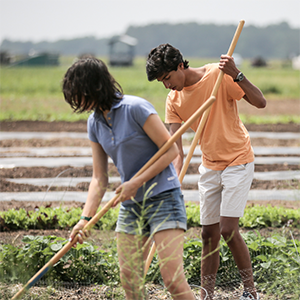 Many students and alums think of St. Andrew's Dining Hall as the center of the School's campus. At the center of the center, you'll find SAGE Dining Services staff, working around the clock to provide the SAS community with three meals a day, plus snacks. Since 2013, Dining Services Director Kelly Massett and Executive Chef Ray Strawley have been working to increase the percentage of food served at St. Andrew's that is locally sourced (local being anything cultivated within 150 miles of the School). Currently, about 36% of the food served at SAS is locally sourced. For example, 90% of our meats come from Lancaster County, PA. That figure does not include the produce served in the Dining Hall that is grown in St. Andrew's organic garden. In addition, all food waste from the Dining Hall is composted for use in the organic garden, or used to feed the pigs at Bohemia Lea Farm, owned and operated by Callen Hurtt ’90. 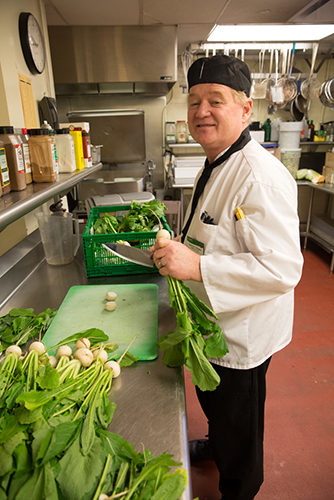 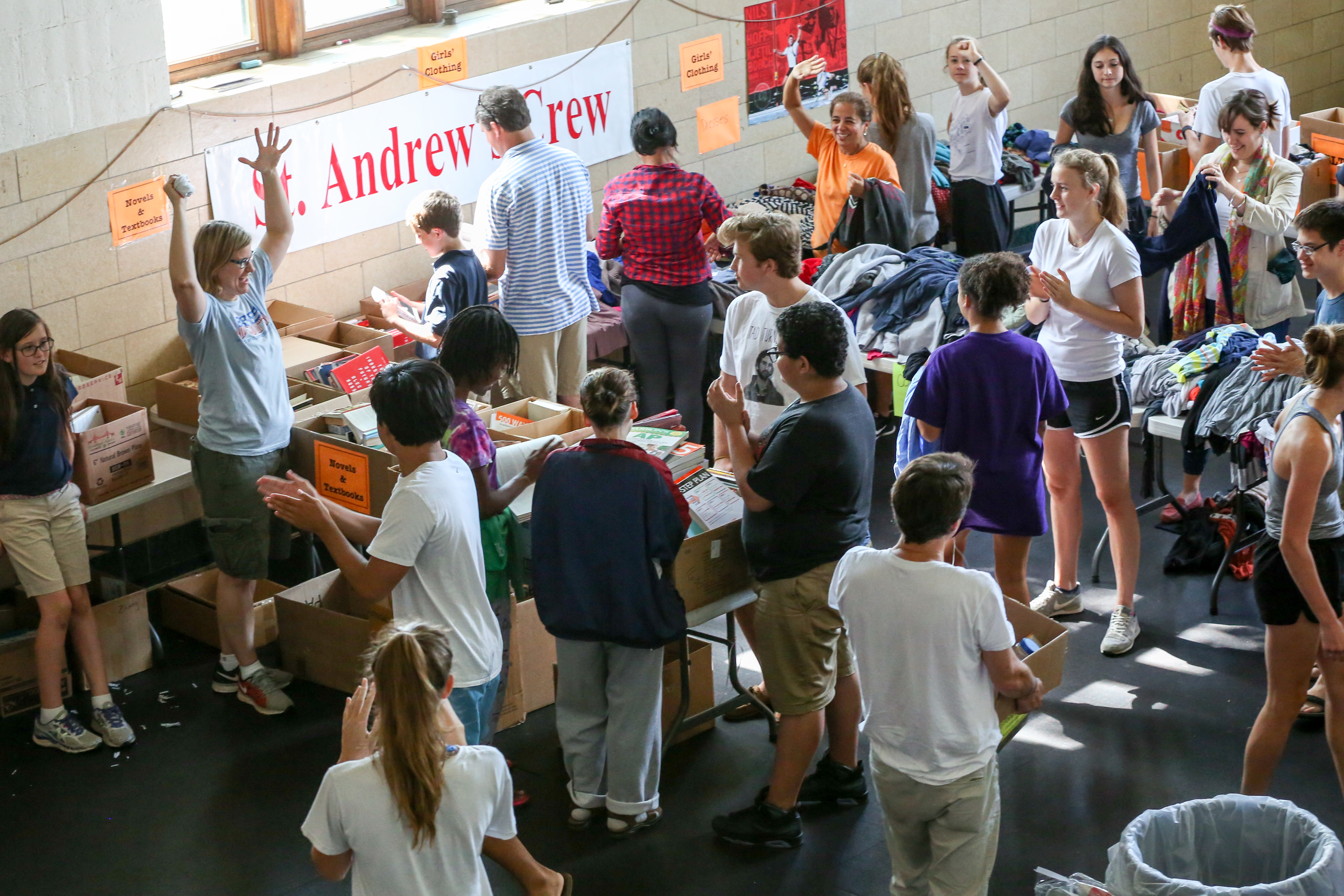 Our School community is constantly seeking ways to reduce the environmental impact of our waste and our over- consumption of materials. Because a large portion of our waste occurs at the end of the school year, our community works together to donate unwanted items through Project Zero. At the end of the school year, students place unwanted reusable items such as clothes, shoes, school supplies, and toiletries in Project Zero boxes located in common spaces in each dorm. Our entire community then works together to sort through the donations, first, taking what our community needs and then preparing the rest for donation.

The remaining waste that cannot be donated through Project Zero goes to Revolution Recovery in Wilmington, which is able to recycle approximately three-quarters of the waste they receive from St. Andrew's.

Throughout the school year, St. Andrew’s also offers single stream recycling throughout campus. The Environmental Stewards help the student body Terracycle hard-to-recycle items like chip bags, candy wrappers, shampoo bottles, and juice/fruit pouches. Plastic bags and batteries are also collected on dorm for recycling. All food waste from the Dining Hall is composted for use in the organic garden, or used to feed the pigs at Bohemia Lea Farm, owned and operated by Callen Hurtt ’90. Our community regularly prints double sided on 100% post consumer recycled copy paper and three water bottle filling stations were recently installed on our campus to reduce waste from disposable plastic water bottles. All our construction waste (about 300 cubic yards annually) goes to Revolution Recovery in Wilmington which is able to recycle about ¾ of the waste that is sent.

The student-lead Environmental Stewards are the heart and soul of our sustainable initiatives. They work to raise environmental awareness and promote sustainable habits within the student body. For example, the Stewards conduct monthly environmental audits of dorms and corridors, in which they give each hall a score based on various environmental tests of each individual room, plus common rooms: how many appliances are turned on or plugged in; whether or not trash is sorted; if lights have been left on, etc. (The hall with the best audit score wins a Ben & Jerry's ice cream feast.)

The work of the Environmental Stewards is about creating an ethic of environmentalism, and ultimately an ethic of kindness and compassion, into St. Andrew’s students. Being involved in the Stewards has made me a more conscious human being. It’s taught me to be hyperaware of my actions, and what impact they have on the world around me.

Comprised of students, faculty, staff, and administrators, the Green Council works to fulfill the School's environmental mission by fostering a culture of sustainability at St. Andrew's.

"St. Andrew's is committed to the sustainability and preservation of its land, water, and other natural resources. We honor this commitment by what we teach and by how we live in community and harmony with the natural world"

Green Council initiatives have led St. Andrew's to be honored with: