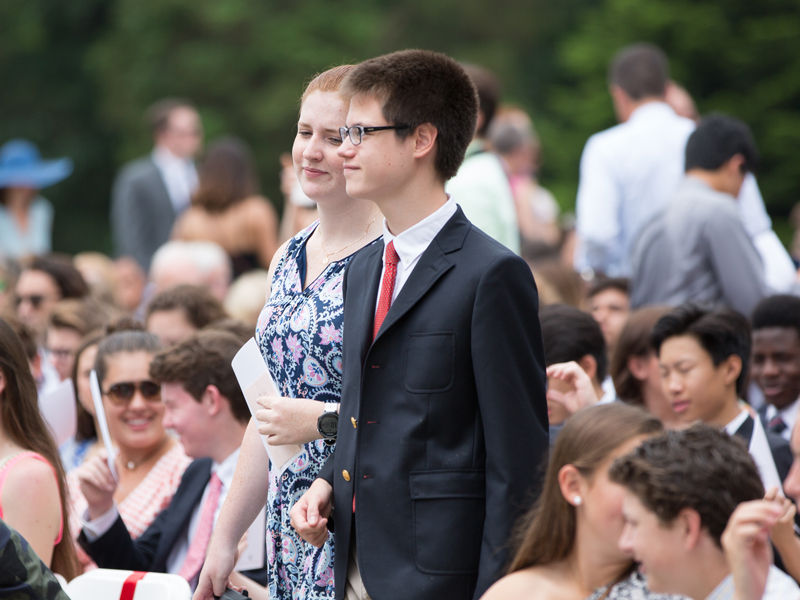 Earlier this summer, I had the honor and privilege to be the soloist at a funeral mass for a man named Steven Leone. I didn't know who he was and I only agreed to sing for this service because of the money that came with it. I soon realized that Steven was a young man who had died suddenly in his sleep at the age of 21. The family was shell-shocked. His sister, who gave the eulogy, could hardly speak because she was overcome with grief. In moments such as this, it can be difficult to imagine that we still gather together and pray to a God who has just taken a son from his parents, a brother from his siblings, a person who was a mere four years older than me. When the time came for Communion, I sang the hymn "Adoro te devote," text by the theologian and philosopher Thomas Aquinas. The second verse reads: Credo quidquid dixit Dei Filius; / nil hoc verbo Veritatis verius, which is Latin for "I believe whatever the Son of God has said; / that there is nothing truer than this word of Truth." [1] This notion of "Truth" allowed me to realize that, at this moment, I was singing for something much larger than myself. Watching a couple hundred people come forward to make an outward sign of faith, I understood that our presence together was centered around a need to comfort and support one another amidst these human feelings of grief, sorrow, and despair.

Many of you know that I spend a lot of time singing and playing the organ. As is the case with many church musicians, I am often told by parishioners that I have a secured place in heaven for all the time I spend in church. Although I don't think that the hours I spend playing and singing in church have anything to do with life after death, these moments have allowed me to connect with something deeper and larger than my own idea of life, something far more worthwhile than counting the number of hours spent practicing or the number of dollars earned.

Music is everywhere. It is often used to convene people together for a time of prayer and reflection. Tonight, for example, marks the end of the Jewish holiday of Yom Kippur, the Day of Atonement. One might traditionally sound the shofar, the ram's horn, to signal the end of one's observance. Music is used similarly in other traditions, such as the Call to Prayer in Islam and the practice of ringing bells in many Christian churches. So why is music-making—singing in particular—such a prevalent and important practice?

For one, it helps us make sense of and find new understanding in our lives. Although we learn many things from everyday conversation, song brings us to a completely different dimension. Consider the text of my favorite Christmas carol, "A Stable Lamp is Lighted," by the American poet Richard Wilbur. The last verse reads:

But now, as at the ending,

Imagine this poignant text set to music: to the melody and harmonization working in sequences of patterns and the verses falling on top of each other without pause. Although I still don't understand all the intricacies of either the poetry or the music, I still resonate with its spirit, using it to make sense of my own emotions and experiences.

Music also helps us remember things. It often easier to remember stories, rhymes, and poems when we set them to music. If you have taken or are currently taking Ms. Furlonge's AS Vergil course, you know that one of the first graded assignments is to recite the first eleven lines of the Aeneid. While it seems daunting at first, this task becomes a lot easier when you work with the meter in dactylic hexameter. The dactyls and spondees within the epic, in a way, create their own music, ultimately allowing the overall text to spring alive in a more resonating way. After singing it countless times, many of us probably know bits and pieces of the School Hymn by memory. Every time we sing this hymn again, we remember how the text has helped us grow and develop over time.

Perhaps the most important aspect of music in our lives is the practice of communal singing. Singing with others takes us out of our own perspectives and encourages us to listen, to be present, and to learn from the people around us. Over the summer, I heard a talk at Yale Divinity School by Don Saliers, currently a professor at Emory University. He described an experience he had during an ecumenical gathering outside of Geneva, Switzerland, on the evening before Easter in 1985. Many of the people who gathered were from countries behind the "Iron Curtain"—from the Soviet Union, Easter Germany, Czechoslovakia, and Romania. He didn't understand any of the language during the Easter Vigil, but what carried him through the liturgy were the sounds of the chanting and the folk-based hymns. When the bells finally sounded for Easter, he said: "We stood from so many different cultures, languages, and traditions, at the very center of the cosmos, singing and receiving the song in which heaven and earth were embraced." [3] Here at St. Andrew's, we all have our own stories to tell, visions to share, hopes and fears to express. This practice of collective singing, as was the case with Don Saliers, unites us and encourages us to discover who we are as a community. Who can forget the powerful moments when we all join in song? From the School Hymn to "Lift Every Voice and Sing" to "Amazing Grace," these moments allow us to connect, to be present, and to experience the imperfections, the beauty, and the friendship that comes with singing together.

So what can we do to experience and keep experiencing these moments at St. Andrew's? First, we need to take the opportunity to listen. We bring a lot of spirit into everything we do at here, but we can bring a different sort of spirit into this place. Consider Mrs. Taylor's words at School Meeting the other day: to take advantage of these moments in the chapel as a time to contemplate and to reflect. Let's make the most of the quiet around us and ask ourselves how we can resonate with what is being sung or played and use it moving forward. Let's feel comfortable with participating actively so we can experience and witness these shared moments together.

Now, every time I sing "Adoro te devote," I think of Steven and his family. I feel as if I'm with them, even though I've never met them and will probably never see them again. I like to think that Don Saliers, whenever he attends the Easter Vigil, recalls the sense of connection he felt in Geneva, uniting with people who spoke different languages and came from different cultures. I hope that we can share our own moments in this space: to be comforted, renewed, and empowered to take what we've learned from what we've heard, sung, or played beyond these walls. May we all sing our own songs together bring more healing and song to the world.