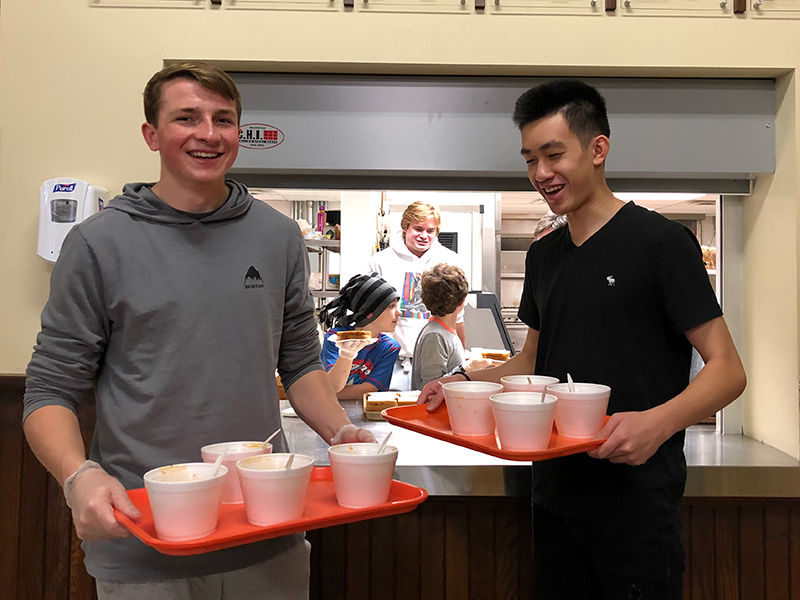 On a bitterly cold January 20, sixteen seniors and 3 faculty members put midterm exam prep aside to get proximate with homeless men and women of Wilmington seeking relief from dangerous wind chills that had pushed temperatures into single digits. Saints participated in the Code Purple program, an initiative of Friendship House of Wilmington that provides shelter and warm food to the homeless when harsh winter weather conditions threaten their lives. "St. Andrew's School is privileged to be part of a rotation of service with seven other churches who participate in the Code Purple winter sanctuary," explained St. Andrew's Chaplain Jay Hutchinson. The sanctuary begins at 3:00 p.m. and concludes when large shelters, such as the Salvation Army, open at 8:30 p.m. to take in residents for the night.

Student volunteers divided into two shifts to work with Code Purple clients. "Our first team, organized by community service co-head Leandre Pestcoe '19, made and served two hundred peanut butter and jelly sandwiches," said Hutchinson. "They also served hundreds of bowls of hearty soup, provided by St. Andrew's Chef Ray and the SAGE Dining Services team." The second group of students arrived at 6:45 p.m. to find 75 men, women, and children seated at round tables, enjoying their meals while waiting for shelters to open. "Led by our other community service co-head, Jamie Rowley '19, this cohort of seniors wasted no time spreading themselves around the room and engaging these clients in conversation," Hutchinson said. "Nick Loh '19 also brought his cello and played it for the people during this later shift! People were mesmerized."

"To be frank," Hutchinson continued, "Code Purple services is not 'easy' community service—it's not akin to going to transitional shelters such as Andrew's Place or Epiphany House, which are more controlled environments. Our students must deal with their own nervousness as they approach a table of the currently, not recently, homeless."

"In these moments, we learn as much about ourselves and our own preconceived notions about what homelessness looks like," Hutchinson concluded. "This kind of experience forces our students out of their comfort zones and gives them the chance to come alongside another person who is human, just like them. These brief, mutually beneficial exchanges demonstrates the power of service to show us much about ourselves, and about 'the other.'"