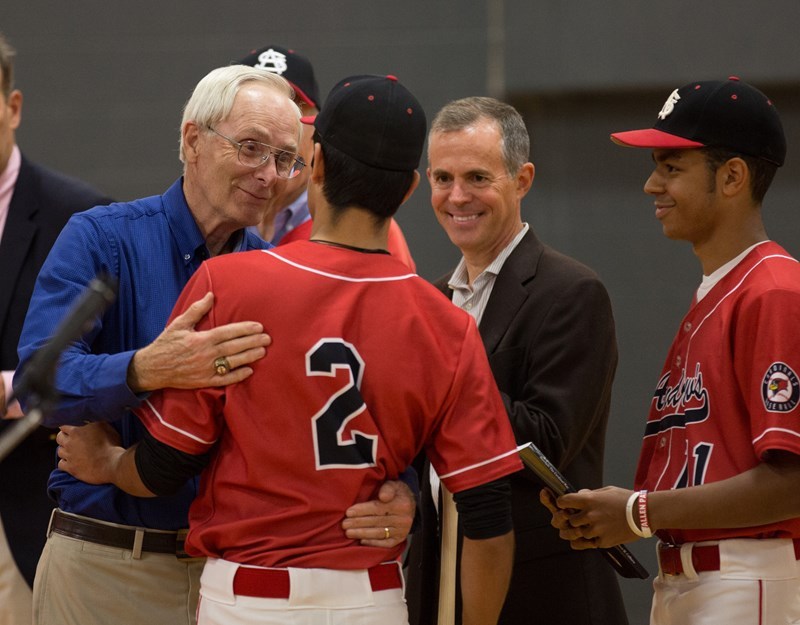 Colburn retired at the end of the 2016 season, after serving for 55 years as Head Coach

On Tuesday, May 24, St. Andrew's varsity baseball Head Coach Bob Colburn was inducted into the Delaware Sports Hall of Fame. Colburn has served as Head Coach for the past 55 years, and is stepping down at the end of this season. Colburn has also been inducted into the Delaware Baseball Hall of Fame in 1994 (at the time, the only member recognized for high school coaching), and in the National High School Baseball Coaches Association Hall of Fame in 2008.

Earlier in May, current and past St. Andrew's baseball players, coaches, and families gathered in the School's Sipprelle Field House to honor Colburn and all he has given to St. Andrew's. After a rousing national anthem sung by 2016 baseball co-captain Donovan Simpson '16, many alumni and friends stepped up to the podium to testify to the far-reaching impact of Bob's character and commitment.

"Bob is our most honored, legendary and transformational coach in our 80-plus years of school history," said Headmaster Tad Roach during his opening remarks at the event. "To honor the sport of baseball and its full educational potential, Bob made the following commitments fifty-five years ago: he would teach his teams the habit, structure, and discipline of fundamental baseball. He would never allow his team to do anything or say anything that would be arrogant or disrespectful or insensitive to the opposing team, coaches, or umpires. And he would naturally transfer his love and respect for his players to a lifetime commitment of mentorship, friendship, and at times even rescue."

Colburn arrived at St. Andrew's in the fall of 1960, and helmed his first season of Saints baseball that spring. He coached and taught chemistry and physics at SAS for the next four and a half decades, and also served as the School's athletic director and football coach for a number of years during that time. He was named Delaware Chemistry Teacher of the Year in 1996. After retiring from teaching in 2005, he continued to coach the baseball team. He has technically worked at St. Andrew's for 56 years, but does not count the year he went on sabbatical in his final coaching tally.

During Colburn's coaching tenure, the Saints went to the state tournament three times (in 1993, 2002, and 2003) and received five sportsmanship awards from the Delaware Umpires Assocation, including one for the 2016 season. Colburn was named state coach of the year four times (in 1981, 1988, 1991, and 2002). His teams have won 436 games and eight Independence Conference titles.

"I was a pitcher on Coach Colburn's team and to this day I think Coach Colburn wonders why," quipped Scott Sipprelle, Chairman of the Board of Trustees. "Coach Colburn was an incredibly strong part of my St. Andrew's experience, which molded me as no other experience has in my life. I've always thought that baseball is a great symbol of life: baseball cannot be scripted. The coach doesn't call plays; the game comes to the players, and you have to be prepared for anything. That's why I'm so incredibly grateful for the experience I had at St. Andrew's, both as a student and as an athlete, because it was the most transformative thing that ever happened for me. And for that, we will always remember and be grateful to you, Coach Colburn."

To read more about Colburn's career, visit the Delaware Sports Hall of Fame website, or check out this April 22 Delaware News-Journal article on his retirement.