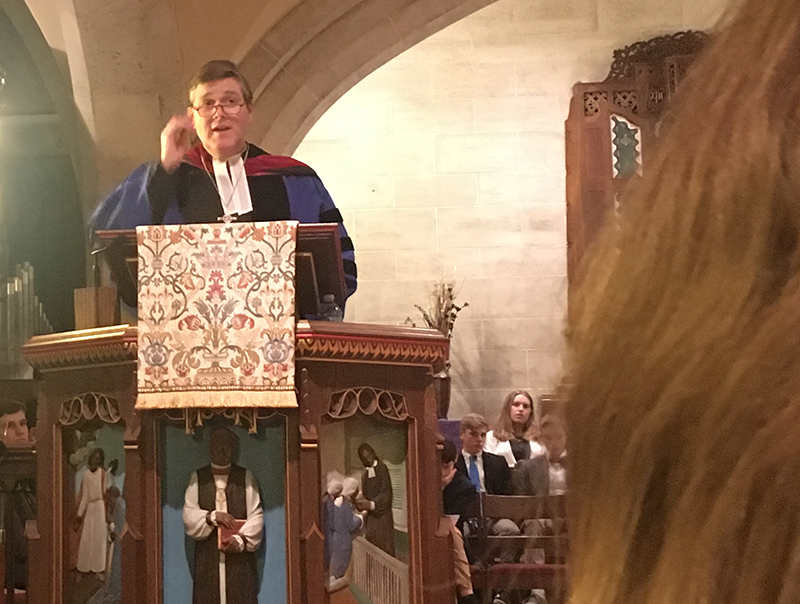 "The kingdom of God is like a mustard seed, which, when sown upon the ground, is the smallest of all the seeds on earth; yet when it is sown it grows up and becomes the greatest of all shrubs, and puts forth large branches, so that the birds of the air can make nests in its shade."

Some years ago, David Garrow wrote a book called Bearing the Cross: Martin Luther King, Jr. and the Southern Christian Leadership Conference. It won the 1987 Pulitzer Prize for Biography. You might get to read it sometime in history class or on your own. It is worth the effort. Garrow quotes King's sister Christine Farris as saying: "My brother was no saint," but "an average and ordinary man." Yes, Martin was one of the greatest leaders this country has ever known, but he would be the first to proclaim that his greatness came from God. Garrow also quotes Diane Nash who said: "If people think that it was Martin Luther King's movement, then today, they—young people—are more likely to say 'gosh, I wish we had a Martin Luther King here today to lead us.' ...If people knew how that movement started, then the question they would ask themselves is, 'What can I do?'"1

I share this with you today because I want to suggest that you right here have the power to change the world. You right here are people who can make a massive difference in the world today. You may be young; you may be in high school; you may not have figured out what you want to do in your life, much less what you want to study in college, you may still be growing in mind and body, and you actually have the power to make a difference. Maybe one of you will be the next Elon Musk sending rockets into space and developing electric cars. Maybe one of you will be like Steve Jobs or Bill Gates. Maybe one of you will follow the lead of St. Andrew's alums like Erin Burnett or Maggie Rogers. If that happens, that would be wonderful and if it does don't forget this school and what it has done for you. More likely you will be given smaller opportunities to change the world and those opportunities are important as well. Some of them may grow from a tiny little seed into so much more.

Fred Craddock who used to teach at Emory University once wrote that "life consists of a series of seemingly small opportunities. Most of us will not this week christen a ship, write a book, end a war, appoint a cabinet, dine with the queen, convert a nation, or be burned at the stake. More likely this week will present no more than a chance to give a cup of water, write a note, visit a nursing home, vote for a county commissioner, teach a Sunday School class, share a meal, tell a child a story, go to choir practice, feed the neighbor's cat."2 I want to suggest that those little things can make a huge difference.

When I was in grade school, one of the most popular boys in my class was Don O'Brien—Don's uncle used to be Headmaster here at St. Andrew's; he has cousins here now. Don is a spectacular athlete. He was a running back on our football team. He played ice hockey so well that our team of eighth and ninth graders beat the high school varsity—eleventh and twelfth graders. Don was on the varsity team at Dartmouth all four years and he played lacrosse beautifully too. Frankly Don was good at pretty much every sport he tried. I'm sure that every one of his coaches remembers him. He's the kind of gifted player that every coach wants. Yet as I look back on our growing up years, I think that Don's greatness came not from his athletic or academic ability, but rather from the fact that he made a special effort to look out for and make friends with those who were not spectacular athletes and those who were a little less popular. I can tell you that changed their world. I know because I wasn't nearly so popular or strong. Who are the people right here you could lift up? How might you become greater by making a difference in the life of one of your schoolmates at St. Andrew's? And of course you can also make a difference in the larger community.

We are all of us hurting in the aftermath of the shooting in Florida last week. Students and teachers should not have to worry about guns in schools. One of the advantages of having a brother who is Associate Headmaster here is that he sometimes sends me Mr. Roach's letters to the community. Last week Mr. Roach was right on the mark: in schools that practice civility, kindness, compassion, citizenship, reverence for diversity, and respect for human rights, are we really expected to become locked camps always prepared to run, hide or fight for our very lives?3 Is that really the best we can do? There are people who will suggest that you really can't make a difference. You are too young, too naïve; your elders better understand the ways of the world. I hope you will not believe that. It was young people who sat in at lunch counters and joined the freedom riders, and so many other demonstrations leading to the end of Jim Crow. It was young people who helped to put an end to the war in Viet Nam and to Apartheid in South Africa. Maybe it is young people who will lead the way on ending gun violence in our land. Yes every one of us can take steps to reduce violence in our lives—everyone of us can do that—but I'd like to think that some of you here today will help us all to move towards a time when schools and concert halls and places of worship and places of simple human gathering will return to being sanctuaries for peace, joy, creativity, hope, exploration, renewal and joy.

Several years ago, a minister friend told me that she had gone to what she called church the previous week at Gillette Stadium. It had nothing to do with the Patriots, although some might say that Patriots fans have a religion all their own. The lights were bright and of many colors flashing all around. It was crowded and full of energy and really, really loud. It was, she said, a U2 concert. Part of the reason she called it church was that Bono, their lead singer, had been actively involved with the One Campaign, fighting global poverty and disease. He's made a great difference in the world. Yet, in the middle of that concert on the giant screen above the stage, Archbishop Desmond Tutu spoke to those gathered: "The same people," he said, "who marched for civil rights in the United States, are the same people who protested apartheid in South Africa, who are the same people who worked for peace in Ireland and are the same people who fought against debt slavery in the Jubilee year 2000, who are the same beautiful people that I see when I look around this place tonight in 360 degrees. We are those people. We are the same person."4

That got me thinking. Right here you have the same potential for courage, compassion, justice and integrity that was shown by those Desmond Tutu mentions. Maybe it is not that they were so different from the rest of us, but rather that they took advantage of the opportunities that were offered to them. We are the same people.

I'd like to think that a great many years from now when you return for your 20th or 30th or 50th reunion, you will be celebrated as one who had the courage to stand up for your friends and for those who couldn't stand up for themselves, as one who showed compassion and courage and strength, as one who changed the course of history. You have the power to change the world.

Now to the One who by the power at work within us is able to do far more abundantly than all we can ask or imagine, to God be glory in this community, and in our world, to all generations, forever and ever. Amen.