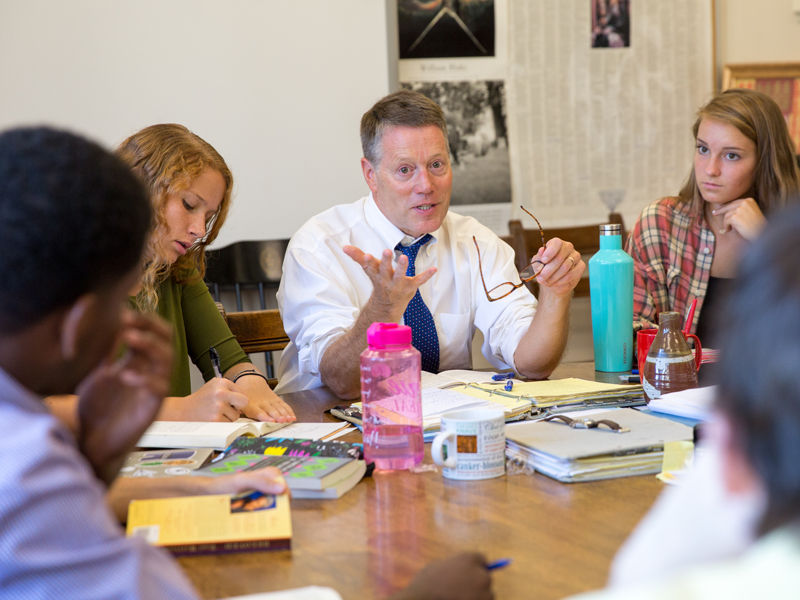 Choice: A Chapel Talk by Associate Head of School Will Speers
Will Speers
September 6, 2018

Associate Head of School Will Speers gave this Chapel talk during the first Wednesday night Chapel service of the 2018-19 school year.

In 1985, in Alabama, Anthony Ray Hinton, age 29, was arrested for murder, a crime he did not commit. He was convicted of that crime, and sentenced to death by electrocution. After about five years on death row, his appeals callously rejected, Mr. Hinton realized that because he was poor, black and in Alabama, he had almost no chance for release, much less for justice.

Late one night in his cell, a cell only yards away from the electric chair that awaited him, Mr. Hinton heard a fellow inmate call out in the darkness, "Oh my God ... please help me. I just can't take it anymore" (The Sun Does Shine, p. 112). Paying more attention to his own bleak world than the one desperately crying out to him, Anthony Ray Hinton knew the corrupt judicial system had won. He wasn't going to get out. He was going to die in prison in that electric chair down the hallway. For much of his waking hours, he was obsessed with thoughts of killing the sheriff and district attorney. He wanted revenge.

Did he really believe God was going to help him? There was no God in this place. There was no choice but to take it until you couldn't take it anymore or they killed you. God may sit high, but he wasn't looking low. He didn't see us here. There was no light in this dark place, so there was no God and no help and no hope. (pg. 112)

When I read this passage last June, I was struck by the visual isolation—two men, separated in their own cells, unaware of the other. Initially, Mr. Hinton was so wrapped up in his own grief and despair that the other inmate's crying didn't even bother him. But then:

The man started crying again, and I realized that I was crying too. I sat down on the edge of the bed, and I wept silently for a man I didn't even know, who was most likely a killer, but who also wept in the dark, all alone, in a cage, in Atmore, Alabama. You didn't have to be on death row to feel all alone, and I knew there were people all over the world, at this exact moment, sitting on the edge of their beds and crying. Most days it seemed like there was more sadness than sense in the world. I sat there for a few more minutes, listening to the other man crying. (p. 115)

What a dynamic, humbling, awe-filled moment of sympathy, of envisioning the universal loneliness and desolation of all humanity. Mr. Hinton knows this man's spiritual agony, because it's his own—they are both crying together—but now he's connected through this leap of imaginative grace to a world beyond his cramped cell. Anthony Ray Hinton escapes his own exile and crisis, choosing instead to commune with an unknown person next to him—perhaps a murderer, but nevertheless a person in need, a person similar to him.

How did this epiphany and conversion happen? Listen to Anthony Ray Hinton's next insight:

Anthony Ray Hinton's embrace of his deeper freedom revives his voice and animates his body to stand up and reach out to his fellow prisoner, "Hey! ... Are you all right over there?" Before, Hinton assumed there was only one path forward: despair, hatred, anger. But by connecting to another person, by investing in a cause bigger than himself, he realizes he still has a choice—of hope, faith, love, compassion.

This is vibrant, fundamental, audacious empathy; empathy Shakespeare reserves for his most forlorn, resilient characters; empathy off the transformational charts; empathy, as David Foster Wallace exclaims, that is "sacred, on fire with the same force that made the stars."

What better time to honor and commence with this bold approach to living than the start of a new school year. While the world of social media, political talking heads and even some of our elected leaders want you to stay divided, stay safely inside your ideological mansion or uncomplicated castle of comfort, we at St. Andrew's have the choice, have made the choice, have committed ourselves to the arduous task to live, learn, help and serve together. We've resolved to wrestle openly with complex, sometimes messy questions and challenges—about diversity, gender, civility, justice, equality.

We have chosen to be here at St. Andrew's: we've selected this particular type of education, this type of residential school. The decision exemplifies our core character—that we value community, scholarship, the arts, athletics, the spiritual life, human interactions. As Ms. Furlonge asserts, we have chosen to be kind, not merely to be nice.

By choosing this School with student-centered classes, students commit to collaboration, to speaking, listening and debating with curiosity and civility. You've elected to paint, sing, dance, compete, engage, serve, lead, follow—with purpose and excitement. You've decided to attend a school where you will experience living with a roommate, where you will share and respect space, where you will actively seek out new people, individuals different from you. For all of us, there is an almost endless opportunity to meet new people this year. Indeed, when we settle too quickly into a comfort group, into a limited circle of friends, we become stagnated, bored, stale. Yet I've watched students pledge to meet new people throughout the year—to sit next to different classmates at meals or on dorm or in the classroom. That's a choice that keeps enriching everyone. It is humbling to realize how much more there is to explore, how much more someone can give to you; but it is also fulfilling, illuminating and exciting to discover a new friend, even to find a fresh aspect of yourself in that individual.

When my V Form classes read Jesmyn Ward's Sing Unburied, Sing last winter, we were struck by the complexity of the central characters, especially Leonie. We wanted her to be the bad mother, but Ward kept complicating that too-easy narrative. Mam chose to see her daughter in the full panoply of her nature, and she helps Jojo try to attain that radical empathy for a mother he doesn't like. Just before she dies, Mam and Jojo talk about Leonie as a mother; even Mam acknowledges that "'She ain't going to feed you.'" But when Jojo declares that his mother "hates" him, Mam, in choosing to witness all of her daughter, proclaims:

No, she love you. She don't know how to show it. And her love for herself and her love for Michael—well, it gets in the way. It confuse her. (p. 234)

It would be simple to categorize Leonie as the selfish, horrible mother who has abandoned her two children for an abusive husband and her drug habit. But Mam makes the harder, more complete choice: while she acknowledges Leonie's limitations and confusion, she affirms Leonie's love—it's the most prominent word in the passage: Leonie's "love" for Jojo, her "love" for herself, her "love" for Michael. "Love" is a word we haven't associated with Leonie, but Mam insists on understanding, even celebrating, her daughter's complicated capacity to love.

My hope for all of us this year is that we honor and cherish the choices we can still make. Even in bleak moments, as Anthony Ray Hinton taught us, we can choose "Hope ... Faith ... Love ... Compassion." The toughest choices are demanding, confounding and scary because more is at stake: we risk loss, we can be hurt, it might well be safer not to get involved.

There is so much to explore, share, witness, discover, change, consecrate. These opportunities await us throughout the year, and through all our days. Let us seize these adventures, as arduous as they may be. Let us choose to make this school year resound with affirmation and purpose. Let us choose hope, resilience, grace, justice, joy, kindness, compassion, love. Let us choose family, friendship, the forgotten, the uncomfortable, the other. Why all these choices? Because they are "at once the hardest thing, and the only thing possible" (T.S. Eliot, The Family Reunion).