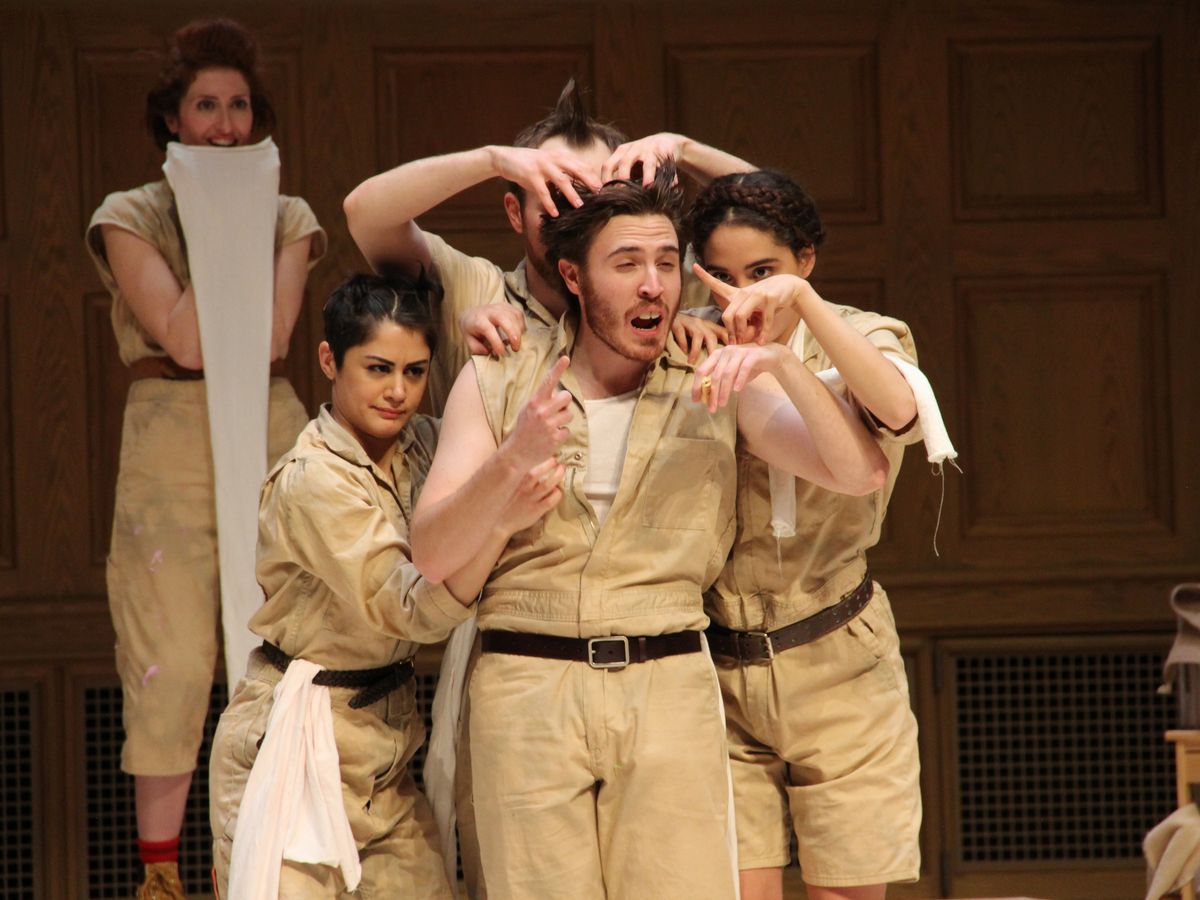 Earlier this spring, spaghetti and mashed potatoes were flung around the stage of Engelhard Hall—but not for a senior prank, nor was this an Open Mic Night gone terribly wrong. Rather, the theatrical company Shakespeare in the Square (SITS), co-founded by Dan Hasse '10, was performing their food-centric interpretation of A Midsummer's Night Dream. In residence on campus from Friday to Sunday, SITS also visited film and acting classes, led a workshop in the Forbes Theatre, and ate dinner with students in the Dining Hall (no food was hurled during the meal).

Founded in New York City in 2010, SITS produces and performs Shakespeare's plays in outdoor settings, off-Broadway theaters, and regional tours. The company's name comes from its origins in Washington Square Park, where the company's original members, all NYU students at the time, would perform Shakespeare's works for any passerby who cared to watch. "I went to NYU for film," Hasse explained, "and started Shakespeare in the Square with [classmate] Rose Bochner as a side venture because there was no Shakespearean company for non-acting students at NYU. We started performing outdoors, in Washington Square Park, because permits were only $50 and we couldn't afford an indoor space." The simultaneous limitations and freedoms of "performing in broad daylight " as Hasse puts it, has helped propel SITS performances in wildly creative directions, even as the company has moved its productions out of the park and onto the stage. SITS performances eschew sets and effects; the company focuses instead on the text, original staging practices, and breaking the fourth wall.

"The great thing about the Park is, if the show's not good, the audience just walks away," said Hasse. "So you know immediately if the show is working or not, and when it's working, it's magical, because you know that the audience has other places to be, other things to do, and they're choosing to give you their time and attention. This had a huge impact on the culture of the company. We're very comfortable speaking directly to, playing off, and clowning with the audience. Our productions have to be engaging from act one all the way through act five."

Enter the food fight. Noting that A Midsummer's Night Dream is one of Shakespeare's most oft-produced plays, SITS considered ways in which it could creatively reinvent the world of the play, and landed on the idea of making their production "edible." The company then worked with Brooklyn-based performance artist Hannah Kallenbach to replace all of the show's props with foodstuffs. "Hannah's speciality is using food as a performance medium to explore silliness and kink and childishness, and all of those things sort of felt in keeping with the world of Midsummer," Hasse said. "The lovers spend most of the play in this liminal place between goofy and sexy. We really wanted to revert back to our childhood improvisational spirits and see how many ways we could manipulate a piece of food. Take crackers, for example—in the play, we use them as paper; for karate practice; as straight razors; as fairy dust, when we crumple them up."

"We also wanted to be constantly surprising the audience," Hasse continued, "and keep the actors on their toes. They experiment with food while they're performing, not just in rehearsal. If an actor spots a loose piece of spaghetti in the downstage corner, she has the freedom to incorporate that into the scene, if she can think of a way to do that in the moment."

SITS' residency at St. Andrew's was the first stop on their tour of this production of Midsummer, and the first time they had performed the play in front of a live audience. "We learned so much from the experience of performing in front of a few hundred ninth through twelfth graders," he said. "It really informed the rest of our tour. It helps to have a smart, engaged audience when you're developing a show!"

At St. Andrew's, Hasse was "definitely more of a film geek than a theatre geek," he says. "I spent most of my time filming pirate parodies in the woods of Noxontown." His first directing experience took place in Engelhard; he directed Words, Words, Words, a one-act play by David Ivies for the Winter Play in 2009. "Emily Pressman allowed students to direct that winter, which was very trusting of her," Hasse notes. "That was where I first got the theatre bug." In his VI Form year, he attempted to make a documentary about Theatre Program Director Ann Taylor's production of Much Ado About Nothing. "I shot about 80 hours of footage," he recalls. "I followed around the actors during and outside of rehearsal, and tried to dive into the neuroses of doing romantic comedies with your peers. It was really fun, but I couldn't make it work. And it's actually the last documentary I ever tried to make."

At NYU, Shakespeare in the Square eventually became such a popular student club that the company was able to do an off-Broadway run of Romeo and Juliet in 2015—and the rest is history. Hasse now serves as the company's Artistic Director, while also teaching, writing plays and screenplays, and occasionally directing NYU student productions. The current tour of A Midsummer's Night Dream has been so successful that the company is remounting the production for an off-Broadway run in New York in mid-August. (Tickets are available at shakespeareinthesquare.com.)

"The members of SITS were incredibly friendly and generous with our students," Taylor remarked after their visit. "The way Dan manipulated the staging to make the show work with only six actors displayed great theatrical wisdom, and the workshops were spot-on in terms of intensity and creativity. When they left campus on Sunday, a student said to me, 'I wish they could stay all semester. I loved having them here!'"

Hasse noted that the SAS community was equally generous with his traveling troupe. "The company was housed on campus with faculty members during our stay," he said, "and everyone was so generous with their couches, spare bedrooms, and refrigerators. It was a big morale boost for the tour to spend that first weekend hanging out with faculty kids and dogs and getting to know the students in the Dining Hall, outside of the workshops and the performances. That was a highlight."