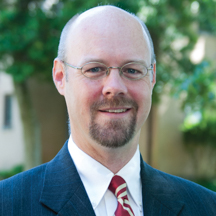 David had a triple major at Beloit College in Wisconsin. He studied Spanish, philosophy and government. He continued to pursue his passion for baseball at Beloit. He pitched and played outfield for the Division III school. He was the treasurer of the Community Senate and a disc jockey on the college radio station.

In 1993, David taught English in Costa Rica and met St. Andrew’s Spanish teacher Ana Ramírez, whom he married in 1999. David earned a master’s degree in Latin American studies from Tulane University in 1997. While at Tulane, he combined his academic pursuits with his passion for baseball by receiving a grant to study the history of baseball in Nicaragua. After graduate school, David lived and worked in the Washington, D.C. area before marrying and coming to St. Andrew’s.

David enjoys traveling, cooking, reading, and road cycling. On rare occasions, he plays the trumpet with the St. Andrew’s Orchestra and Jazz Ensemble. He lives with his wife, Ana, and his son Gabriel in a house overlooking Noxontown Pond.