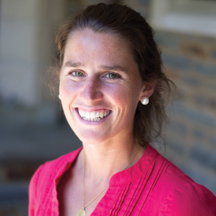 Jenny grew up in Vermont, where she attended Mount Mansfield Union High School. After helping to lead her soccer, Nordic ski, and lacrosse teams to state championships, Jenny was named Female Athlete of the Year her junior and senior years at MMU.

At Hamilton College, she earned a bachelor’s degree in mathematics and was a member of the women’s cross-country and lacrosse teams. As a captain during her senior lacrosse season, Jenny received All-American honors and helped lead her team to win the NCAA Division III national championship. In 2020, Jenny earned a Master of Arts in Liberal Studies from Darmouth College.

Throughout high school and college Jenny was actively involved with Young Life. Her other passions include running, waterskiing and playing in the mountains of Vermont.

At St. Andrew’s, Jenny lives in a house on Noxontown Pond with her husband, Matt, and her children, Finn, Teagan, and Jack.