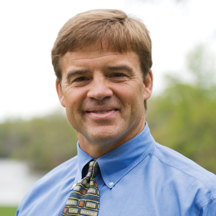 Jay graduated from Sewickley Academy in Sewickley, Pa., where he was president of the student body and a member of the varsity soccer, wrestling and lacrosse teams. He went on to play those sports at Amherst College, where he majored in economics. At Amherst, Jay was the first recipient of the Eugene S. Wilson Scholarship.

After graduating from college, Jay taught religion and history for one year at the Canterbury School in New Milford, Conn., and coached soccer, wrestling and lacrosse.

In 1985, Jay joined his wife, Whiz, on the faculty at Choate Rosemary Hall. He taught religion, ethics and economics and continued to coach all three sports at the varsity level for 11 years. In 1993, he was named Boys’ Varsity Lacrosse Coach of the Year. For his last five years at Choate, Jay was the first Director of Community Service and created the program that won the Governor’s Youth Action Award in 1992.

In 1996, Jay began his divinity school studies in Massachusetts while working part-time at Saint Mark’s School as a religion teacher, dorm supervisor and coach of boys’ wrestling and lacrosse and boys’ and girls’ soccer. He graduated from Harvard Divinity School in June 2000 and was ordained an Episcopal priest in May 2003. In Delaware, Jay works on the Diocesan Committee that trains lay people on issues of racism and diversity as well as serving as a supply priest in many of the Diocese’s parishes.

Jay and Whiz spend their summers at their home on Squam Lake in Holderness, N.H., with their son, Jack, and many animals. In the Diocese of New Hampshire, Jay enjoys serving as a supply priest and teaching water skiing to disabled children.