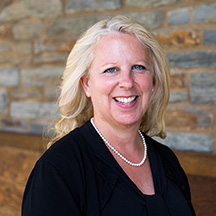 Ann Shepard Visalli was appointed to the newly created Chief Operating Officer position at St. Andrew’s in 2016. Prior to that, she served as the Director of the Office of Management and Budget (OMB) for the state of Delaware, appointed by Delaware Governor Jack Markell on January 21, 2009 during one of the most historic budget deficits in Delaware’s history.

Prior to her appointment as OMB Director, Visalli served as Deputy State Treasurer for the State of Delaware. In that role, she oversaw the daily operations of the Treasury, including the management of $1.5 billion in invested balances and the State’s $1.3 billion debt management program.

Visalli served as a legislative fiscal policy analyst for the Office of the Controller General from 1997-2001 providing non-partisan fiscal support to the General Assembly, the Joint Finance Committee and the Joint Capital Appropriations Committee. From 1994-1997, she served as a fiscal management analyst in Federal Cost Recovery for the Delaware Department of Services for Children, Youth and Their Families and she started her career in the field of Economic Development.