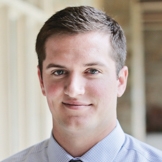 Originally from south Jersey, Patrick graduated from Williams College in 2011 with a degree in political science. At Williams, Patrick was a three-year starting quarterback for the football team. Over those three seasons he led Williams to a 20-4 record, including a perfect 8-0 mark and NESCAC Championship as a senior. After his senior season, Patrick was awarded the Gold Helmet Award as Player of the Year in New England for all of Division II and III. He was also named NESCAC Offensive Player of the Year, Division III Player of the Year by the Touchdown Club of Southern New Jersey, and 2nd Team All-East Region Quarterback by d3football.com.

After graduating from Williams, Patrick moved to Chicago and worked in sales. From there he moved to Vermont where he spent three years coaching football at Norwich University. During his time at Norwich he coached the quarterbacks and wide receivers. He helped guide Norwich to an ECAC bowl game in each of his three seasons there. Patrick also took the opportunity to further his education and completed his master's degree in public administration while at Norwich.

At St. Andrew's, Patrick works in the Admission office, coaches football, assists with the indoor track and baseball teams, and is the Director of Summer Programs on campus.