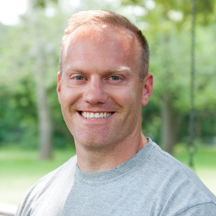 Al was born and raised in downstate Delaware and attended Lake Forest High School, where his father was a mathematics teacher and football coach and his mother taught business. He was elected first team all-conference his senior year of high school soccer.

Al went on to attend the University of Delaware, initially as a civil engineering major, but after a year decided to pursue his interest in human anatomy and physiology in the biology department. In 1993, he became a member of the Lambda Chi Alpha fraternity and went on to earn his B.A. in biology in 1996. The following year, Al pursued a certification in athletic training through the University of Delaware’s internship program and began a two-year, 1,000-hour volunteer period at William Penn high school. After passing the NATA certification exam in June of 1998, he began working at St. Andrew’s as the certified athletic trainer the following fall.

In 2015, Al became St. Andrew's Director of Athletics. He holds certifications from the NSCA as a Certified Strength and Conditioning Specialist and Functional Movement Specialist. He also holds Level 1 Certification from the Titleist Performance Institute. His professional interests are in the use of new flexibility, strength and conditioning programs to prevent common injuries in athletics. Al enjoys his involvement with the Chapel program and feels that the spiritual talks and mentoring of students at St. Andrew’s have been among the most rewarding aspects of his career.

Al’s hobbies are woodworking, graphic art, playing the guitar and exercising. Al lives at the Ford House with his wife, Shara, and their triplets, Bryer ’21, Tyler ’21, and Caden ’21, and their youngest son, Chase.