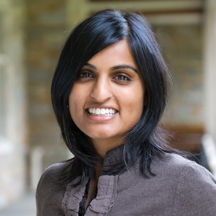 She initially used her degree in communications in the field of commercial advertising in New York and Chicago, representing large companies. However, she decided her true calling was teaching and left big business behind to pursue a career as an educator.

"Before joining St. Andrew's, Neelima taught at North Shore Middle School in Long Island. Prior to her work in Long Island, she taught in the New York City public school system at schools in the Bronx and Manhattan as a New York City Teaching Fellow. During her breaks, she participated in a fellowship for the National Writing Project and as a program scholar in the Japan Fulbright Memorial Fund Teacher Program. She has also studied Francesco Petrarch in the south of France through an award from the National Endowment for the Humanities.

In addition to teaching, Neelima has participated in creative writing workshops and has presented her original work at arts festivals on both coasts. Her writing has also been published in the book,Imagining Ourselves: Global Voices from a New Generation of Women. She also volunteered in India teaching English and creating “bridge courses” for former child laborers.

In her free time, Neelima enjoys reading, traveling abroad and eating delicious vegan meals made by her husband, Harvey Ryan Johnson. They have two young daughters, Leela and Maia.