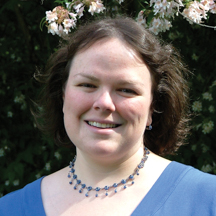 Emily grew up on the campus of The Hotchkiss School in Lakeville, Conn. As a student at Hotchkiss, Emily served as head of the community service organization, edited and wrote for a student magazine and was deeply involved in the drama program. In her senior year she served as a proctor in an underclass dorm.

During the 2002-2003 academic year, Emily taught at Phillips Academy in Andover, Mass. As the Richard M. Lederer Teaching Fellow in history at Andover, she taught world history, lived in a dormitory as a house counselor and directed the ninth grade play. In summer 2004, Emily was awarded a fellowship to the Klingenstein Summer Institute through Columbia Teachers College. In more recent summers she has pursued study in England, Ireland and Northern Ireland, including a program focused on educational leadership at Oxford in 2019. In the summer of 2015, with Giselle Furlonge and Ana Ramírez, she co-founded the St. Andrew's Summer Institute (SASI). SASI engages a small cohort of St. Andrew's faculty each summer in new thinking, research, collaboration, and reflection on our work as teachers, advisors, counselors, dorm parents and coaches.

Emily returned to Yale in fall 2008 for a master of arts degree in history. In addition to further work in 19th century American history and Southern history, her studies encompassed 20th century American conservatism, comparative genocide studies, and issues in historical memory. Her graduate research brought her back to our state archives, as part of her examination of massive resistance to school desegregation in Milford, Del., in 1954.

At St. Andrew’s, Emily teaches history and serves as the faculty advisor to the Honor Committee, and is the Dean of Faculty Development. Together with Elizabeth Roach, she created and now teaches a fully interdisciplinary course for seniors entitled "History, Literature and the Contested Past." The course examines how novelists, poets, and historians have wrestled with and made sense of the past and their relationship to it. Emily enjoys cooking, reading, travel, music of all kinds, tracking down quirky historical monuments, and going to the theater any chance she gets. She lives in Pell Dorm with the III Formers and her hound dog, Ruthie.