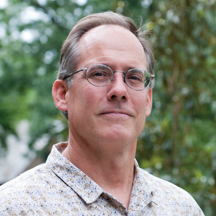 Mark grew up in Raleigh, N.C., before attending The Mercersburg Academy, where he was a member of the water polo and swimming teams. After attending Davidson College, Mark completed his Ph.D. in physics at Rice University where he developed an interest in teaching, especially the unique challenges of conveying scientific understanding to non-science majors.

After a two-year von Humboldt Fellowship in Germany, Mark returned to the United States to join several graduate school acquaintances in a high technology start-up venture. He then spent the next 12 years oscillating periodically between the corporate laboratory and management suite (extra credit for completing the Fourier analysis). In 2002, he left industry to pursue his long-time desire to teach young people.

Beyond helping to raise scientifically literate pre-adults, Mark has a passion for raising interesting combinations of bacteria and yeast (particularly ones that make food taste yummy). His adventures in fermentation have taken him from Appalachia to the islands of the Mediterranean, where he has learned from the true craftspeople of the art. He lives with his wife, Noreen Tully, in a house near campus, where they keep tabs on their children, Sadie ’09 and Davis ’12.