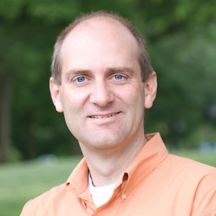 Eric graduated from the College of William and Mary in 1992 with a double major in economics and philosophy. He began his teaching career at West Nottingham Academy in Colora, Md. From there, Eric spent four years at the University of North Carolina at Chapel Hill where he pursued advanced studies in economics, ran the Teacher Training Program for graduate economics students and served as an adjunct instructor and teaching fellow. Eric has also taught math and economics at Georgetown Preparatory School, Georgetown University, North Carolina State University and comes to St. Andrew’s most recently from serving as the chair of the math department at St. Paul’s School in Baltimore, Md.

Eric enjoys coaching the St. Andrew's Math Team. Thanks to a deep talent pool, they have managed to win the state championship twice in recent years. He also manages a new mentoring program at the local charter school that has grown from seven mentors to over forty in the last three years.

Eric’s passions outside of teaching include tennis, golf, skiing and spending time with his two sons, Alec ’22 and Will. Eric and his boys live in a house on Noxontown Road.