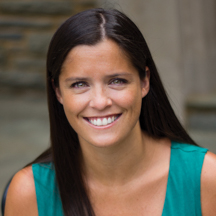 Bernadette graduated from St. Andrew’s in 1999 where she served as a residential leader and was a tri-varsity athlete. She received the Malcolm Ford Award as a V Former and the Henry Prize and the Headmaster’s Award as a VI Former.

Bernadette graduated from Harvard in 2003 with a major in psychology where she was awarded the Harvard College Scholarship and the Elizabeth Cary Agassiz Certificate of Merit for academic achievement. She was a four-year member of the varsity women’s lacrosse team.

After college Bernadette worked in feature film production, working on the movies The Aviator and The Departed. She also worked for a sports marketing company as a consultant to American Express on their sports and entertainment sponsorships. She finally found her way back to St. Andrew’s in 2008 to work in development and alumni relations.