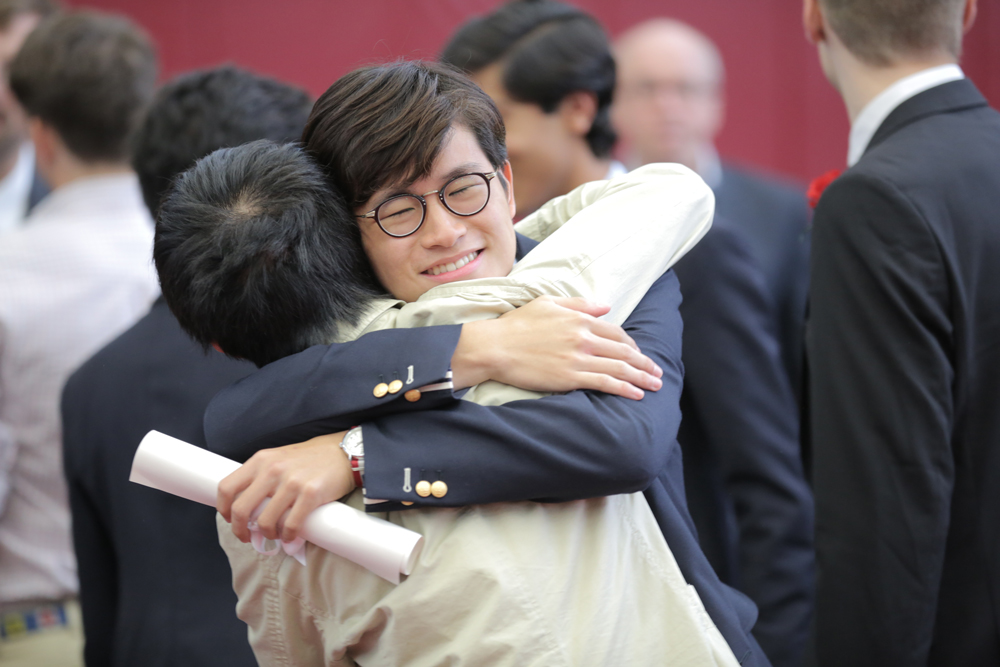 Questions about standardized tests, or testing accomodations for learning differences or disabilities? Contact Director of Testing Cynthia Poarch at 302-285-4229, or cpoarch@standrews-de.org.

Register for the SAT

Register for the ACT

In October of your V Form year, you will take the Practice SAT (PSAT) and National Merit Scholarship Qualifying Test. Students in the IV Form may also take this test. You can use the PSAT to get a sense of what sections of the SAT Reasoning test need your closer attention within any test prep you plan to do. If you do unusually well on this test in comparison with other testers from your home state, you may become a candidate for the National Merit Scholarship Competition. You do not need to sign up for this test; we take care of all the paperwork.

The SAT Reasoning test is a general standardized test with two parts: critical reading and mathematics. You get a score out of 800 on each section. Typically, a student will take the SAT three times throughout your junior and senior years. Colleges will use your best critical reading score and math score, even if you earned them on different test days.

The best schedule is the one that works best for you! Many students, however, choose the following arrangement, taking tests in:

This plan allows the student time to use May and June of the V Form year and November of the VI Form year to take SAT Subject Tests. To make a plan for tackling the SATs, consult with your parents and you college counselor. We can help you come up with the best testing schedule for you.

What you will need to register online:

If you are able to take an SAT Subject Test in your III or IV Form year, and you think you will do well, go for it – this can give you some flexibility in your testing schedule as a V or VI Form student. Many students take two or three SAT Subject Tests in May and June of their V Form year, and then retake one to three tests in November of their VI Form year. If you are not sure about what to take, check out our recommendations, and discuss with your college counselor.

Here is an area where our personalized advice can really help, so come down to the College Counseling office and chat with us! We will generally utilize use the following guidelines in making our recommendations (“performed strongly” usually means high 80s). To learn more about the SAT Subject Tests, visit the College Board Web site, which provides explanations each subject test and mini-practice tests.

You’re eligible for fee waivers if you say “yes” to any of these items:

For more info on what SAT fee waivers cover and how you can apply for a waiver, visit the College Board website.

The ACT might be described as being a mix of the SAT Reasoning and Subject tests. Some students find that the ACT feels more 'real' than the SAT. The biggest differences between the SAT and the ACT are: the ACT has a science section, and youu cannot always “mix and match” your highest score on various portions of the ACT, the way you can with the SAT; typically, you send all the scores from your best single sitting. However, some colleges now combine ACT sub-scores from multiple administrations to create a highest possible composite or super-score for the ACT. Talk to your college counselor if you are interested in taking the ACT.

To register for the ACT, you will need:

To register for the ACT, visit the ACT website.

Upcoming testing dates are always available for review on our College Process Calendar.

The Test of English as a Foreign Language is, well, just that. If English is your second language, you should take the TOEFL in preparation for your college appplications—even if you already took the TOEFL when you applied to St. Andrew's. Your college counselor can help you make a plan for taking the TOEFL.

Sure! You might want to think about focusing on score-optional colleges, even if you have strong scores. Most score optional colleges are small, and have chosen to emphasize getting to know students personally during the admissions process. If this college size and admission philosophy appeal to you, such schools might as well.

Here is a short list of completely score optional colleges and universities in which St. Andrew's students are usually interested. (There are some other colleges, such as Middlebury, Hamilton, and Connecticut College, that ask for some test scores, but allow flexibility in the tests you can ask them to consider.) To find a list of the more than 400 colleges that have flexible testing requirements, check out FairTest, an organization that works to reduce the role of standardized testing in college admissions.

The College Board and the ACT provide the following concordance tables.

First, you should go to sleep early the Thursday night before the test. You should put together an "test bag" of #2 pencils, a copy of your ticket, a watch, your calculator, water, fruit and Power Bars or other sustaining snacks. Be careful of overly sugary snacks—if you eat them early, you might crash before the end of the test. Watch for e-mails from your testing agency telling you exactly where you need to be on test day, and when.

We are here to help! The College Board is a large organization and is capable of error like any other large organization. If it appears that the College Board has made an error in any part of your testing process or scores, call them right away, and let us know as well. The College Board will usually only deal directly with you, but we can help you ask the right questions and guide you through the conversation. Questions about testing at St. Andrew's or about test day? Contact Mrs. Poarch via email to cpoarch@standrews-de.org; she is our Director of Testing and is a great resource.

Here is another area where our personalized advice can help. We offer an online test preparation course free to St. Andrew's students, accessible from Naviance. This hassle-free and effective method of preparation may be your route to great success! But you may also find that one-on-one tutoring, a traditional summertime test prep class, or working on your own with a book could be a better fit for you. Some pointers:

If your question about testing at St. Andrew's is not answered here, contact Mrs. Poarch via email to cpoarch@standrews-de.org; she is our Director of Testing and is a great resource.

Students with learning differences or physical or mental disabilities often require accommodations on College Board tests, including the:

The College Board's Services for Students with Disabilities (SSD) provides a broad range of accommodations, such as:

to students who provide documentation of a disability. The College Board is committed to ensuring that students with physical or mental disabilities receive appropriate accommodations on its tests.

When requesting accommodations, be sure that the documentation show not only that the student has a disability, but that there is a need for the specific accommodation that is requested.

Documentation of Disabilities or Differences

As a general guide, tests used to diagnose learning disabilities should have the following characteristics:

The College Board does not accept "brief" measures, such as the KBIT-2 or WASI. Some commonly used tests/measures to determine if a student has a learning disability (please note that the following list is not exhaustive):

When a student requests extended time, the student should also provide documentation of a test that measures the student's academic skills in a timed setting. Commonly used tests that measure a student's information processing:

A low processing speed score alone, however, usually does not indicate the need for testing accommodations. In this instance, what would be important is to include in the documentation an indication of how the low processing speed affects a student's overall academic skills.

Tests not accepted by the College Board

The following tests are screening tools and, without other measures, do not meet the psychometric criteria to diagnose a disability or establish the need for testing accommodations:

Generally, there are three major disability categories which may require computer accommodations for College Board tests:

Note that not all students with learning disabilities require the use of a computer. Also, some students may fall into more than one of the above categories.

To be eligible for accommodations on College Board tests, a student with a physical disability must have documentation that meets the College Board's Guidelines for Documentation, including evidence of functional limitation. The following documentation should be submitted:

For the purposes of College Board tests, dysgraphia is defined as a type of disability in which a student has fine motor problems that affect his or her writing skills. Please note that poor handwriting is not a disability. Without further evidence to show that it is due to a disabling condition, poor handwriting does not warrant a computer accommodation on College Board tests.

When a student requires a computer for dysgraphia, the following documentation should be submitted:

Documentation of a fine motor problem. Professionals such as occupational therapists, psychologists, learning specialists, or doctors can document such conditions. Some of the common tests that are acceptable by the professional community to document fine motor skills problems are:

An academic test of writing. This demonstrates that the student's fine motor problems present severity in organization, presentation of ideas, richness of language, complex language structure. These tests are usually administered by school or clinical psychologists or educational diagnosticians. They include:

There are some severe learning disabilities that affect a student's overall language-based skills, both in reading and writing. To be eligible for computer accommodation on College Board tests, the student should submit comprehensive cognitive and academic testing that meets College Board guidelines. The documentation should demonstrate severe deficiencies in organization, presentation of ideas, richness of language, complex sentence structure.

When applying for learning difference or disability accommodations for the ACT, be aware that the following tests of academic achievement are comprehensive for documentation of a diagnosis:

Test not consider to be comprehensive or appropriate for diagnostic purposes include: