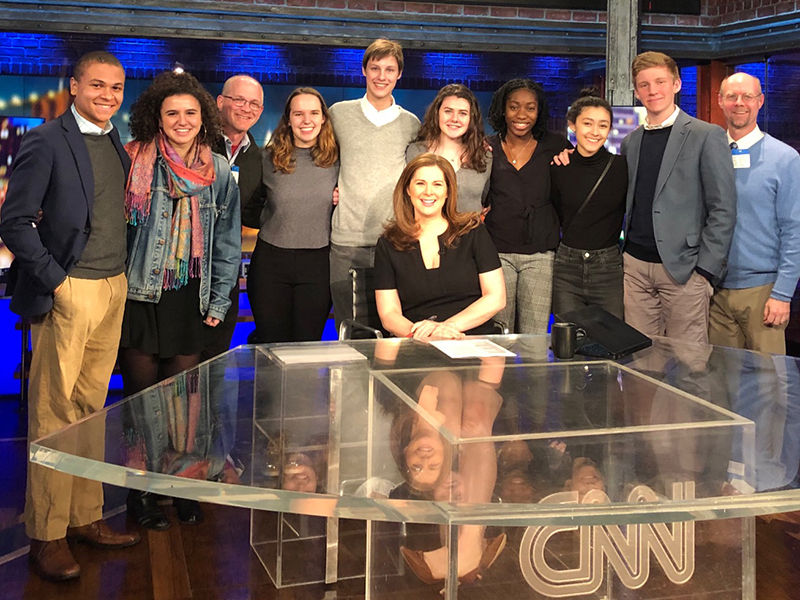 On February 4, eight St. Andrew's students and two faculty members traveled to New York City to visit CNN's studios in the Time Warner Center in Columbus Circle. During their visit, the group observed the newsroom, production control booth, and a few of the sound stages where programs are recorded. The highlight of the trip was their visit on set with Erin Burnett '94 during the broadcast of her show OutFront with Erin Burnett. "Being on set allowed students to see how Ms. Burnett interviews her guests, both in person and by remote connection," said film and music teacher Peter Hoopes, who was one of the faculty members on the trip. "We were given earpieces so we could hear remote guests throughout the show. Students were fascinated by the entire operation, and in particular the professionalism which with Ms. Burnett treated her live and remote guests." Students also learned about logistics of production and talked with camera operators and technical directors. Burnett's assistant, Sarah McCarthy, gave a tour to the group and answered many student questions about her own path to working at CNN. "Hearing about Ms. McCarthy's career and her desire to grow professionally was also very inspiring to the group," Hoopes noted.

"While touring the studio, we saw the many different jobs that exist within broadcast television production, and the many different components that make up a show," said Ava Sekowski '20. "It was interesting to learn about how Ms. Burnett began her career a financial analyst journalist, and how she moved to where she is today. It made me reflect on the ways in which my future career could change and mold into something unexpected. My favorite part of the day was seeing how the show was produced—I loved talking to the stage manager and cameramen."

"Getting to tour CNN's studio and meet and watch Erin Burnett tape her show was an absolute honor and privilege," said Nicholas Lampietti '21. "I think what struck me the most was how noble journalism is, and how the people we met during our visit have dedicated their lives to helping others, through sharing factual and unbiased accounts of current events. I can say confidently that the critical thinking, honor, and empathy so unique to the St. Andrew's community has allowed me to recognize this, and inspired me to pursue a career, such as journalism, where I can make a difference."

"The trip yesterday left me re-inspired to go to school," commented Riley Baker '21. "I had a conversation with a lighting operator, and he was very adamant about how I should follow my passion and put all of my time into pursuing that. The experience of seeing what a fellow St. Andrean built for herself was awe-inspiring and I'm so grateful for the opportunity. I'll remember this trip for a long time."

Nia Cross '21 also shared an inspirational moment from her visit to CNN: "As our group was walking out of the live taping of OutFront when one of the cameramen stopped me and said, 'Hold on, young sister—come here.' My heart dropped because I was wondering if I did something wrong. As he began talking, I was astonished by the words that came out of his mouth. He said, 'I see something in your eyes that you're going to be in one of these positions. Keep following your dreams, because we need more people like you up there.' He then shared his contact information with me in case I ever want to learn more about broadcast journalism. In this moment, I was so humbled and honored. The CNN family greeted me with such warmth and generosity."