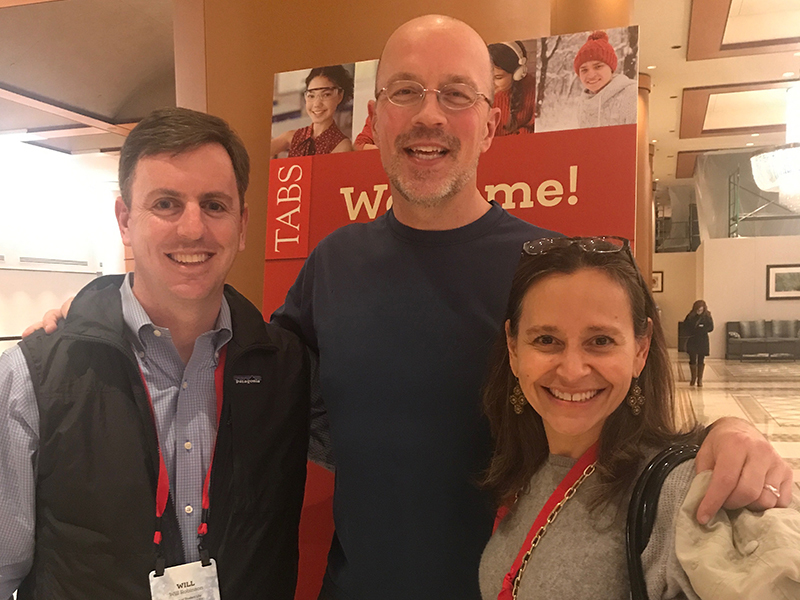 A number of St. Andrew's faculty members recently presented at the annual TABS (The Association of Boarding Schools) Conference, the premier national conference for administrators, faculty, and staff of boarding schools. This year's TABS Conference was held from November 29 to December 1 in Washington, D.C.

Dean of Students Will Robinson (seen here with faculty members Terence Gilheany and Ana Ramirez, who also attended the conference) gave a presentation on St. Andrew's remarkable cell phone-free student culture. Titled "The No-Phone Zone—How to Rid Your School of Smartphones," Robinson outlined for his audience St. Andrew's cell phone policy (students are required to keep their phones in their rooms at all times, and underformers must leave their phones in the hallway after lights out), shared research on the impacts of teen smartphone use, and suggested strategies for importing St. Andrew's phone policy into other school environments.

"In terms of our cell phone policy, what we're doing at St. Andrew's is ahead of the curve," Robinson said. "Schools may have certain 'zones' where students can't have phones, such as the dining hall, or the chapel, but no other school is telling students they simply can't have their phones out of their room. Everyone agrees that smartphones are problem, but schools are really struggling to find a solution." St. Andrew's began its cell phone policy around the year 2000, when more and more students began bringing mobile phones to campus, and administrators began to see their impact on the School's culture. Rather than banning cell phones outright, students were permitted to bring phones to school but were required to leave them in their rooms at all times. As cell phones evolved into smartphones, the rule remained the same. In his presentation, Robinson said he "tried to make a pretty strong academic and emotional health arguments against the constant presence of smartphones. The research over the past two years has been overwhelmingly clear: smartphones are really bad for all of us, but particularly for teenagers with their developing brains that are so susceptible to addiction. Their brains are wired to be addicted to smartphones, and we are giving them the drugs." Robinson notes his presentation had a great turnout, and that he's received a ton of great feedback after the fact.

Religious Studies Department Chair Terence Gilheany (seen above, center) and Dean of Teaching and Learning Elizabeth Roach (not pictured) jointly presented on St. Andrew's ongoing action research project on the academic transition process of ninth grade students. (Gilheany is the coordinator for the School's accreditation work with the Middle States Association Commission, and the "Inspiring All Ninth Graders" project is driven in part by that accreditation process.) In their presentation, Roach and Gilheany shared insights from their study of the ninth-grade academic transition, and best practices for scaffolding and supporting diverse students throughout that transition. They also "made the argument for action research and how it can push schools and teachers forward to strengthen their academic programs," Roach noted.

."As we are at the midpoint of our action research project—Inspiring All Ninth Graders—preparing for and putting together our presentation for TABS was a particularly interesting and productive process for us," she said. "We were able to step back from the work we've been doing, remind ourselves of our goals, articulate and evaluate the action steps we have taken, and begin to envision the work we have to do in the next year and a half. It was both affirming to see what we have accomplished so far as well as exciting to anticipate the work ahead as we push to strengthen the academic transition to St. Andrew's for all ninth graders."

"The educators who attended our presentation asked excellent questions and were eager to engage in conversation about action research as well as the challenges and opportunities of welcoming ninth graders into a new academic culture," Roach continued. "They were impressed with the work we were doing and intrigued by the research. They also reported similar experiences with their ninth graders. Several educators stayed after our presentation to talk more about our project, expressing interest in visiting St. Andrew's, continuing our conversation beyond the conference, and attending our colloquium in the spring of 2020."