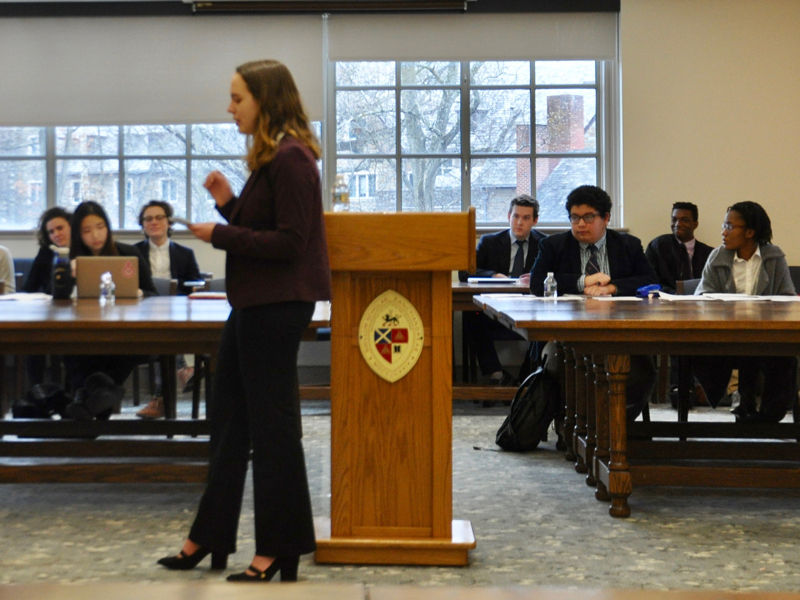 St. Andrew's competed against 23 other high schools in the Delaware Mock Trial Competition on February 22 and 23.

Each round of competition involved half the team—three attorneys and three witnesses, In each round an award is given to the most effective of the six attorneys and the most effective of the six witnesses. St. Andrew's completed in four rounds: against Ursuline Academy in the first and fourth round, against Wilmington Christian School in the second round, and "Tower Hill was our third round adversary," said Mock Trial Head Coach Dan O'Connell. "In the end, with three wins and one loss, our standing was seventh out of 24 teams."

"The mock trial case this year was unusually complex and distinctly Delawarean," O'Connell continued. "The president of a shipping company from a tiny Middle Eastern nation, called Aladin, was suing a Delaware shipping company (Delaware Auto and Marine Inc. or "DAM") for preventing an attempted hostile takeover. The foreign company claimed that the Delaware company acted unlawfully in blocking the takeover. In response, DAM asserted that the acquiring company has terrorist ties, and therefore, their takeover bid should be declined." O'Connell wrote the below recaps of each team member's performance in the courtroom.

In the first round, our team represented the plaintiff side. Noor El-Baradie '19 played the role of the plaintiff—the president of the Middle Eastern shipping company. Noor's job was to persuade the jury of two facts: first, that the price she offered to purchase DAM was generous, and second, that neither she nor her company has ties to terrorism. Before Noor testified, attorney Riley Baker '21 outlined the entirety of the plaintiff's case in her opening statement. Riley's opening made the complexities of this convoluted case clear. She also conveyed the plaintiff's perspective in a compelling and sympathetic narrative. Noor was particularly effective in shaming the defendants for stereotyping people from the Middle East. With the help of Riley's well-prepared questions, Noor infused her performance with emotion and incisive argument. She earned the Most Effective Witness Award in the third round of the competition.

Also testifying for the plaintiff, Carson McCoy '19 played the part of a financial expert. Although he had to concede that he used some unusual methods when evaluating the Delaware company, Carson spoke with so much confidence and expertise that the jury was charmed, rather than being alarmed, by his eccentricities. Carson was awarded the Most Effective Witness Award in the first round of the competition. Iris Hwang '20 was the attorney who directed the presentation of Carson's testimony. She also protected him during cross examination by responding deftly to objections.

Iris, the most experienced member of our plaintiff's team, anchored the team throughout the trial. She also carried the most difficult task—delivering a closing argument just two minutes after the end of the trial. Her comprehensive understanding of the evidence enabled her to actively incorporate the events at trial, rather than merely reciting a memorized speech.

For the last of the plaintiff's witnesses, Mary Puryear '19 performed the direct examination of a disappointed retiree, played by Madeline Birkness '21. Madeline needed to explain that, as a stockholder, DAM's failure to even consider the takeover violated her rights. Madeline inhabited this character thoroughly. Although she seemed to be an innocent "little old lady," the power of her testimony and her sharp response during cross examination were crucial to the plaintiff's success. After each trial Mary was commended by the judges for her poise and for her ability to smile agreeably when demolishing her opponents.

Logan Brown '19 played the part of Pat Kent, the 65 year-old founder and chief executive of DAM. With the help of Bilal Morsi '19, his attorney, Logan portrayed a proud, ambitious and steady businessman who testified that he was only looking out for his investors and for national security. Logan was awarded the Most Effective Witness Award in each of his two performances. One of Bilal's finest moments occurred during cross-examination of the plaintiff's financial expert. After mentioning two factors that could influence the value of a company, the expert claimed to have used both factors in evaluating a company's value. However, the case materials included an affidavit in which this expert clearly favored a single bizarre and irrational cause. The expert attempted to exploit ambiguity in the affidavit. However, Bilal displayed his skills at close reading and quick thinking by pointing out that the phrase "that is the reason" is not the equivalent of "those are the reasons" and the judge compelled the witness to testify consistently with her affidavit.

Austin Daly '22 and Arvin Vanikar '21 are two to the three new underformers on the team this year, and both were a thrill to watch. One of the most dramatic moments of the entire competition was Austin's cross-examination of the retired shareholder. Unfortunately for Austin, delay by an earlier witness caused our team to have only 98 seconds remaining when Austin began his cross-examination. Typically cross-examinations are between five and ten minutes long and Austin had never practiced a cross-examination lasting less than five minutes. However, when he launched his assault—which aimed to show that a personal medical emergency made this witness unreliable—Austin's amazed with his rapid-fire questioning. Incredibly, he completed his cross with twenty seconds to spare. Austin also performed the direct examination of Arvin Vanikar '21 and gave the closing argument for the defense. When Arvin took the witness stand it was like every spectator had been given a shot of caffeine. Arvin's emphatic tone and the punchy directness of his responses was extremely effective.

Liam O'Connell '19 played the role of a former CIA spy. On cross-examination, Liam's opponent's line of questions sought to to cast doubt on the evidence Liam collected while spying in Aladin. Liam testified that he personally witnessed the president of Aladin speaking to a notorious terrorist while the two walked together at the president's secluded private retreat. Liam was pressured to admit that, although he had witnessed this meeting, he could not say with confidence that president and the terrorist actually talked to each other. Liam undermined this attack by admitting in a facetious tone, "Yes, I suppose the president of Aladin and this terrorist might have just been walking together in silence." When spectators in the gallery laughed at this notion, Liam's point was proved.

In addition to her direct examination of Liam's character, attorney Cierra Martinez '20 also performed the cross-examination of the plaintiff. In rounds two and four, much of Cierra's attention was necessarily devoted to arguing objections. In round two she was often responding to objections raised by her adversary. She did so impressively. However, she also learned to take control and by the fourth trial she shocked and delighted the St. Andrew's side with her frequent and well-argued objections. Where most novices would stutter or pause, Cierra would just sigh, before arguing her case with ease.

In addition to parents, the St. Andrew's spectator's gallery included Mr. Roach, Mr. Speers, Ms. Kerrane, and Ms. Tully. We are all very grateful for their support. For the second year Riley Baker's mother, Stacey Baker P'21, flew in from Chicago to support the team. She spectated all four rounds and helped drive students to and from the courthouse on both Friday and Saturday.