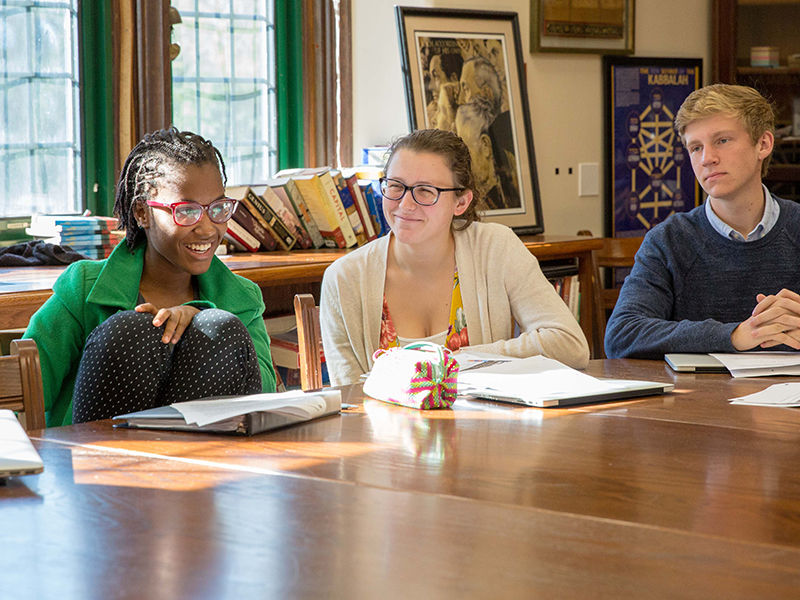 Thanks to our new academic schedule, this school year, many departments have been able to create and offer new, half-year elective courses to students. For example, all Advanced Study (AS) History courses are now semester-long courses, and are subdivided into Readings Seminars and Research Seminars. Reading Seminars are taken first, and allow students to do (in the words of History Department Chair Emily Pressman) "the important work of building thinking, reading, and writing skills they will need in order to have the best experience with a major research paper" that is central to a Research Seminars. All students now take at least two AS History courses (in addition to U.S. History) before graduation, and thus have the opportunity to explore multiple eras and topics of history while at St. Andrew's.

One such new History elective offered this fall is The Mediterranean World, 500-1500. Created and taught by Religious Studies Department Chair and history teacher Terence Gilheany, the course examines the interaction of the many peoples around the Mediterranean basin, from the fall of the Western Roman Empire to the fall of Muslim Spain. ("Globalism is a powerful feature of today's world, but it is not the first time different cultures have come into sustained contact," notes the course description.)

"We have a good offering of ancient history courses, and we have a whole lot of modern history courses," Gilheany explained when asked about his motivations for creating the Mediterranean World course, "but we had very few offerings in the middle of those two eras. So that was part of it. I've also been to all these conferences and workshops in the last few years that have been focused on using non-traditional geographical spaces, like seas, as the framework for the course." Gilheany was particularly inspired by the work of Susan Douglass, a curriculum designer with the Center for Contemporary Arab Studies at Georgetown University (Gilheany and Douglass are both members of the Middle East Outreach Council (MEOC), a nonprofit that works to increase public knowledge about the societies and cultures of the Middle East). Douglass has designed an entire history course centered on the Indian Ocean, and has also developed a short unit, in conjunction with George Mason University, on the Mediterranean for use in ninth grade world history courses. Gilheany used Douglass's work, conversations with fellow teachers and researchers at MEOC, and the book The Great Sea: A Human History of the Mediterranean, by historian David Abulafia, as he worked through the design of the course.

And, in typical "Mr. G." fashion, the Mediterranean World takes off with gusto. "I walk into the classroom on the first day and say, 'Guys, guys! The Roman Empire has fallen!'," Gilheany explains. "And that's one of the first things we discuss. The question of when the Roman Empire actually fell is fun—we do a bunch of reading and watch some videos that problematize that claim. For one, by 500 AD, the Roman Empire has been falling for a long time. Two, an entire half of the Empire—the Eastern Roman Empire or the Byzantine Empire—continues on and is wealthy and successful for a thousand more years. It's capital is in Constantinople, they're making big bucks, they absolutely consider themselves Romans. So did the Roman Empire fall around 500 AD? It depends on what you mean by 'fallen,' it depends on what you count as the Roman Empire, and so on." Students use primary source materials to conduct their own analysis of this and other historical claims from the time period covered in the course. Gilheany asked students to compare Mediterranean shipwreck records from the fourth and sixth centuries when examining the question of when Rome fell; letters and recollections written by both Francs and Muslims during their study of the Crusades; a chronicle of the Black Plague, written by Sienese shoemaker Agnolo de Tura, titled "I Buried My Five Children With My Own Hands"; and the Tabula Rogeriana—"a map commissioned by a Christian king of Sicily and executed by a Muslim cartographer," explains Mr. G. "Sicily was a site of both conflict and cooperation between Muslims, Western Christians, and eastern Christians in the Middle Ages, and the map is a fascinating element of material culture from that time." Students studied a high-resolution photograph and a reprint of the map, and discussed their observations and questions before engaging in historical readings about the map and Sicily in the 12th century.

The uniform 75-minute classes (also introduced by our new academic schedule) have allowed Gilheany to get more creative and expansive with his in-class activities as well. Early in the semester, he had each student play a "role" from a different level of society in a particular medieval year— "we had the Byzantine emperor, we had an enslaved person, we had a Jewish merchant, we had a Venetian merchant," Gilheany recalls. Another activity split students up into Venetians and Crusaders, with each side negotiating a ship-building agreement at the beginning of the Fourth Crusade. "The 75-minute structure works so much better in that we can do longer things like the Venetian/Crusader debate," he notes. "Under the old schedule, we'd get warmed up, talk about one thing, give a very brief introduction to the homework, and then we were done. I liked teaching the 40-minute classes—I wasn't thinking that the system was broken—but this [new schedule] turns out to be really, really cool. I'm over the moon about it, actually."

Something that might not have lit up his students at the outset, for example, was their study of a selection of secular texts from the Jewish community of medieval Cairo. Gilheany explains: "It's Jewish tradition to treat the Torah and the Talmud as if they are human bodies, so with the sacredness with which you would treat the deceased. You bury the Torah; you don't toss it in the trash. For some reason that we don't understand, the Cairo Jewish community in the Middle Ages expanded this rule to all texts that had Hebrew writing on them. It's nice to have a medieval copy of the Torah, but it's really unusual to have a medieval bill of sale or a copy of someone's diary. We'll get a sense not only of what this medieval Jewish community was like, but also a sense of the interactions between Jews and Muslims and Christians in Cairo at that time. We are looking at tolerance and intolerance in a big way."

Throughout the course, students thus have the opportunity to explore how people of differing faiths negotiate their beliefs; how commerce, conflict, and conquest inform cross-cultural relations; and how individuals bridge identities and cross borders—pirate/trader, ruler/exile, plutocrat/pauper, infidel/convert, pilgrim/holy warrior—in an epoch of human history that is at once wildly different, and yet faced with many of the same challenges, as their own.