Last week, faculty wrapped up their first semester courses, and students took midterm exams. During Exam Week, St. Andrew's campus is full of your typical "finals" activities—lots of quiet studying and coffee-drinking;, a packed library; students reveling in the freedom to wear comfy pajama pants during the academic day—but the week also plays host to more unexpected and dare we say, exciting forms of academic and community engagement.

On the Sunday afternoon prior to Exam Week, the Honor Committee sponsored a study break in the Dining Hall, "as a reminder to classmates that occasional breaks are an important part of good study habits," explained Dean of Honor Emily Pressman. "Everyone had the chance to snack on some brain food—clementines, carrots and hummus, fresh popcorn—warm up with some coffee and hot chocolate, and have a sweet treat. Students were invited to write a positive affirmation to put themselves in a good place mentally for exam study, and got to take home some swag in the form of SAS Honor pencils. Senior Co-Heads of the Honor Committee Mia Beams '19 and Xander Atalay '19 [pictured here with the affirmation board] hope this will become an annual tradition!"

On the same Sunday, VI Form students went on an early morning mission/shopping spree to buy supplies to fill Exam Baskets for their fellow students! (And it was a sleep-in Sunday, no less.) Exam Baskets are a twice-annual tradition in which families send their students baskets of "study fuel": snacks, desk supplies, and encouraging messages. Baskets are assembled and delivered by the senior class. Thanks to all our parents, grandparents, and other family members who purchased a basket this year! You helped Saints get through their finals!

Rather than administering the expected final exam or essay, many faculty designed "out of the box" end-of-semester assessments for students.

Students in Dr. Johnson's Bioengineering course (a one-semester science elective) were tasked with creating a bio-inspired design project, then present these designs in a poster session for their peers and faculty. "The goal of the course is to involve students in an interdisciplinary vision of biology, engineering and architecture by studying the structures and functions of animals and plants in their environment," Dr. Johnson explained. "Students created and presented original bio-inspired design projects as a capstone project. During the ten-minute poster presentation to their peers and teachers, some faculty played the role of a possible support source, such as a venture capitalist." Student design proposals included a human echolocation device for the blind (Griffin Batson '20), the use of stem cells for patient-specific monoclonal antibody treatment for breast cancer (Katerina Kourpas '20), a hyperbolic spring based on the claw mechanism of the mantis shrimp (Jeffrey Roh '20), and a functional artificial bladder created via tissue engineering (Alex Qian '19). 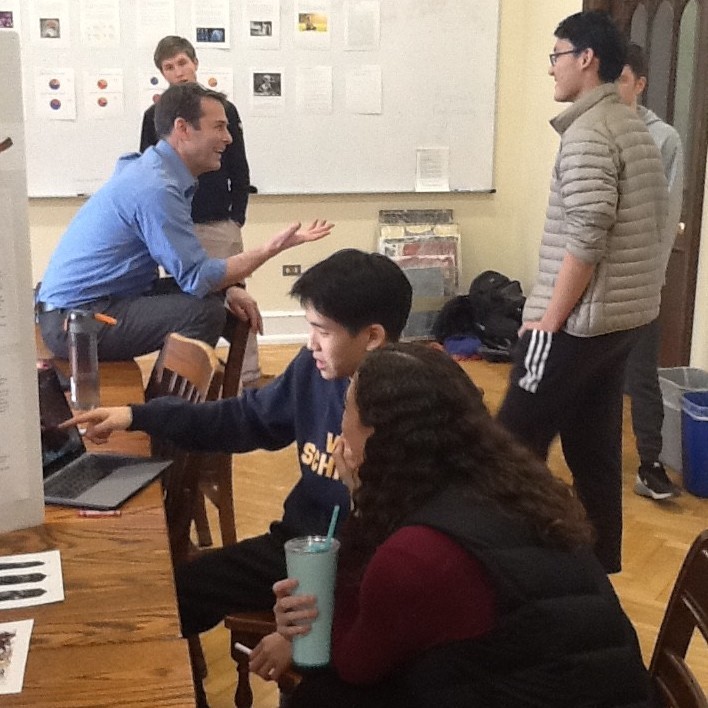 For a final assessment in Anatomy and Physiology, Dr. O'Connor asked her students to choose a disease and then "dream up a patient—describe the symptoms that they would have, and so on," Dr. O'Connor sai. "Students then presented their patients to their classmates for diagnosis."

Computer Science II students spent part of their semester building and programming robots, which they then raced in a final "Grand Prix" for an eager crowd of spectators in the Dining Hall on the Sunday before Exam Week.

III Form students in Mr. Porter's English 1 class have been reading Macbeth, and on Tuesday of exam week, they collaborated with V and VI Form students in Ms. Taylor's Acting 1 class while acting out scenes from the play on the Engelhard stage. "For my part, I am trying to get my students to 'see' their own version of the play," explained Mr. Porter. "There is a huge difference between reading the lines and speaking them, between inhabiting them and watching them be performed by someone else. Ms. Taylor described it beautifully at the start of the acting workshop—she began by saying that if she held up the lines in the book for the audience to read, they would not be legible, so her role as an actor is to make them appear large enough to be 'read' from the back row. She was imploring them to project their voices, but her metaphor also works for the way acting out a scene brings the words to life and conveys their full meaning."

"Students from Acting 1 used their sense of stage savvy to direct scenes from Macbeth in ways that helped III Form students find their theatrical bravery and provoke the necessary response from their scene partner," Ms. Taylor continued. "Students helped each other to clarify each character's intentions in each scene, encouraging controlled movement and strong voices. As their teacher, I love how the exercise of teaching a younger performer shines a spotlight on how much these Acting students have each grown as a performer during the semester. They find out that they have learned more than they realized!"

The following Wednesday evening, Acting 1 students performed two short plays as their own capstone project for the semester. "Both plays were comedic and involved bananas," said Acting 1 student Rhett Edens '21. "As a semester class, this was both our first and final performance open to the community." Forbes Theatre "was a packed house," said Associate Head of School Will Speers after the performances, "and the plays were a ton of fun."

Music Theory students demonstrated their mastery of four-part harmonies. For their assessment, "Each student wrote the soprano and bass voices of a short sketch," explained Music Theory teacher Mr. Hoopes. "Then they passed their work to a second student who was to fill in the 'interior' voices of the alto and tenor, using compositional guidelines we have discussed in class. Finally, the music was passed to a third student who provided an analysis, comparing the chords to the key and identifying non-harmonic tones."

In English 3 with Head of School Tad Roach, meanwhile, V Form students have been reading Anna Karenina. "My juniors did remarkable work with Anna Karenina," commented Mr. Roach. "They read 45 pages of the novel on their own , prepared remarkable notes and annotation, and wrote three college-level essays on three separate sections of a powerful reading. I was inspired by their commitment."

In Wellness class, Dean of Wellness Whiz Hutchinson had her students write "informed autobiographies"—a project that asked each to reflect on what he or she had learned about themselves over the course of the semester. "They begin the course with an autobiography as well," explained Whiz. "I found the essays very affirming in terms of our goals for the course. Students are taking away exactly what we hope they will."

"I actually really like taking exams," a IV Form student commented midweek. "When I'm studying for a test, I can see how much I've learned and how far I've come. That's a good feeling."