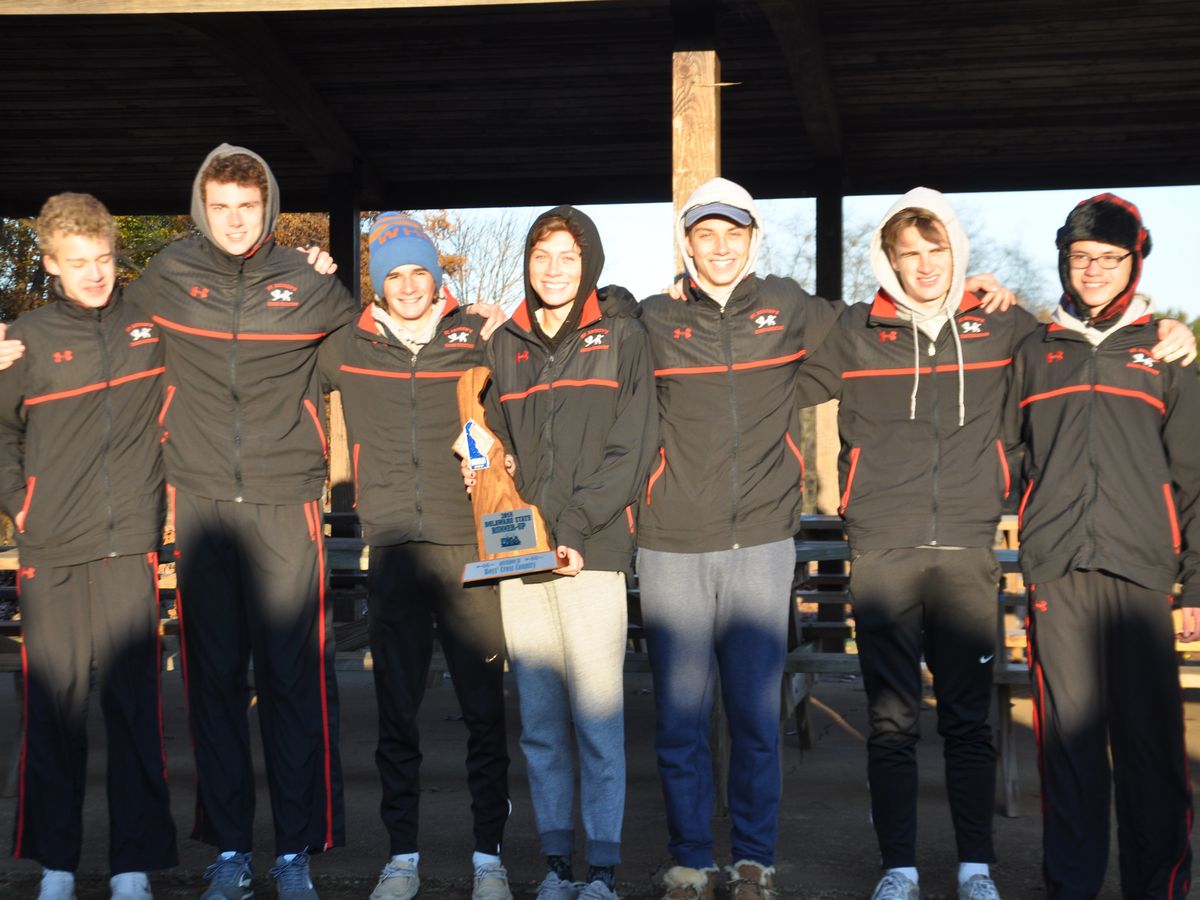 St. Andrew's boys cross-country team capped off their 2018 season with the team's best-ever performance at the state championship meet, and additional accomplishments at the conference and county championships.

At the DIAA State Championship Meet, held at Brandywine Creek State Park on November 10, the boys competed against 30 teams in Division II, and placed second with 45 points, just one point behind the winning team, Tatnall. This was the best team score in a state championship race in St. Andrew's history. Four runners finished in the top 10; previously, in the history of the Saints boys cross-country program, the team has never had more than three runners finish in the top 15 of a state championship race (see bar graph for a visual history of the team's performance at states over the past 30 years). 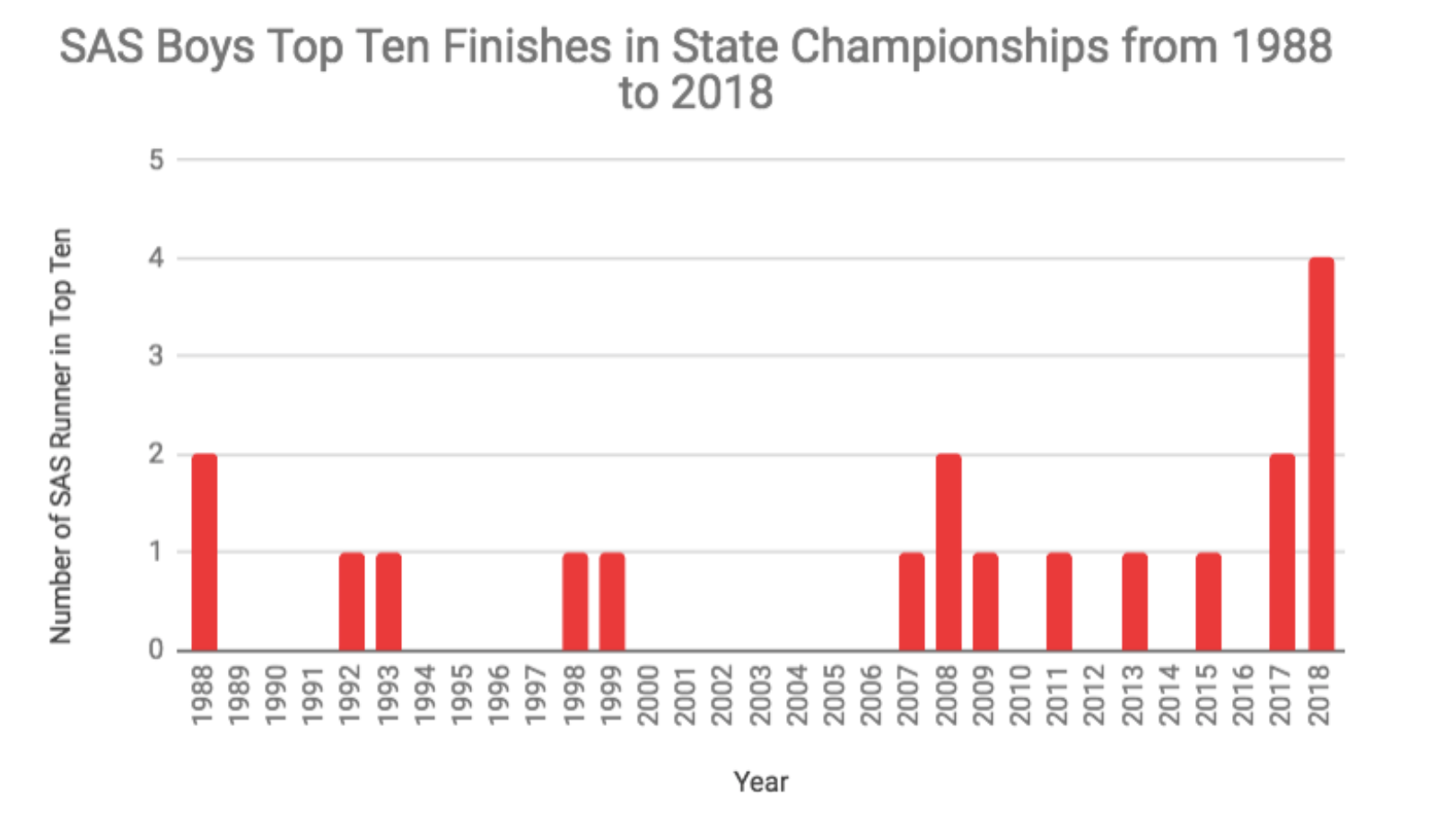 Six St. Andrew's runners placed in the top 25: Blake Hundley '20 (fifth), Carson McCoy '19 (sixth), Tad Scheibe '19 (seventh), Augie Segger '19 (ninth), Will Cammerzell '19 (18th) and JT Meyer '21 (24th). "In spite of the high winds and muddy conditions," said Head Coach Dan O'Connell, "the team time [average time of the top five runners] was 17:46, the fastest in the history of our program for the hilly Brandywine Creek course. All of the boys ran personal-best or season-best times. The boys ran their hearts out."

"Today was a pure demonstration of teamwork," Blake Hundley was quoted as saying in a Wilmington News-Journal article on the meet. "I was going to hold back and work with our two and three[runners] and carry them ahead of Tatnall's number three, and we executed it perfectly."

Full results from the 2018 boys cross-country state championship race can be viewed here.

A week prior to states, the team placed third out of 27 teams at the New Castle County Championship meet. Blake Hundley '20 led the way for the Saints, placing eigth overall with an impressive time of 16:53. Carson McCoy '19 and Tad Scheibe '19 were right on his heels as McCoy ran to a 10th place finish (17:01) while Scheibe came in 11th (17:03). Augie Segger '19 was the fourth Saint to finish, running to a 16th place finish with a time of 17:17.

On October 26, St. Andrew's hosted the Delaware Independent School Conference meet on its trails, where the boys team placed second with 48 points. The varsity team time was 16:32, a new school record that surpassed the previous team time record of 16:42 (which was established during the 2017 season). Blake Hundley '20 and Carson McCoy '19 led the way, finishing 4th and 7th overall, respectively. Hundley broke the 16 minute mark, crossing the finish line in 15:54, while McCoy finished in 16:17. Tad Scheibe '19, Augie Segger '19 and Will Cammerzell '19 were the next three Saints to finish, each cracking the top 15. Scheibe and Segger each broke 17 minutes, good enough for 11th and 12th place, while Cammerzell finished in 14th (17:03). Blake Hundley's time, 15:54, was the second fastest 5K time recorded for any runner in the history of the school. Morgan Scoville '00 holds St. Andrew's 5K record for a 15:52 race run in 1998.

"What an amazing day we had," said Coach O'Connell after the DISC meet. "I am speechless. Congratulations to everyone."

For their achievements, four Saints runners were recognized with All-State honors: 2nd Team: Carson McCoy '19, Tad Scheibe '19, and Blake Hundley '20 were all named to Second Team All-State, while Augie Segger '19 was named to Third Team All-State. This is the most All-State recognitions ever received by a single team in the history of St. Andrew's cross-country program.