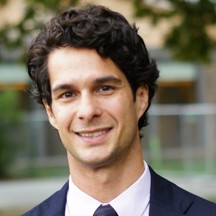 Michael has his B.A. in History from The University of Sydney and Master’s of Philosophy in International Relations from University of Oxford. Michael serves under New York State Governor Andrew Cuomo as President of Moynihan Station Development Corporation overseeing the redevelopment of the James A. Farley Post Office Building into a new intercity passenger rail station for New York City, where he also resides.