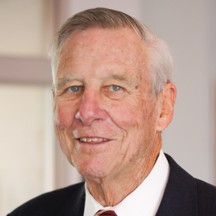 Born in London of American parents, Bill returned to the U.S. at the age of three and attended St. Andrew’s for his V and VI Form years. After St. Andrew’s, he attended Cornell, spent time in the Army, went back to Cornell, where he rowed in the varsity boat, and received a B.S. in industrial engineering in 1950. In 1953, Bill married Sheila Milligan in a 12th century church in England and lived in Rugby for 18 months. After returning to the U.S. in 1954, Bill spent nine years in business with his father and brother selling commercial laundry and dry-cleaning equipment. Bill then went to work for IBM and spent almost 30 years in various marketing positions in the Washington, D.C., Maryland, and Virginia area.

Over the years, Bill has maintained his interest in crew, rowing for the NYAC for one year and now sculling on the Potomac and rowing in the Diamond State Masters Regatta on Noxontown Pond. Bill and Sheila had the privilege of starting the Brownlee Crew Prize given to the outstanding girl rower each year. He joined the St. Andrew’s Alumni Corporation in 1971 and was president from 1975-79. He joined the Board of Trustees in 1974, chairing the Development and Education Committees at different times. In 1994, Bill became a Trustee Emeritus.