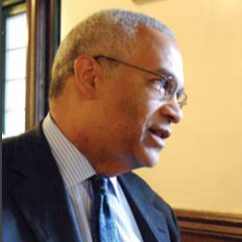 The son of a funeral director and a public health nurse, Tom grew up in Winston-Salem, N.C., a warm, loving environment with a big extended family. Several older boys from his church served as his role models, attending northeastern Episcopal boarding schools and attending Ivy League colleges. He investigated several schools and determined that St. Andrew’s was the place for him. He entered as a II Former in 1966, beginning what would evolve into a close and long-term relationship with the School.

After graduating from St. Andrew’s, Tom went on to Amherst College where he became active in organizing student political and economic conferences, and earned a B.A. in economics. He traveled to West Africa to document the impact of the drought for the House Subcommittee on Africa. Following college he joined Morgan Guaranty Trust’s corporate foundation, determining grants for New York City nonprofit community organizations. After earning an MBA from Harvard Business School, he launched into a highly successful career in radio station management in New York, Virginia and New Jersey, including a six-year stint as an owner-operator in Greenville, S.C.

By his early 40s Tom was ready to do something different with his life. He sold his radio station, and through a St. Andrew’s connection, he discovered St. Philip’s Academy. The School’s financial condition provided Tom with the opportunity to utilize his entrepreneurial skills learned in radio. Tom became its first Director of Development in 1996 and built the department into a highly successful and consistent fundraising operation. St. Philip’s Academy is a K-8 independent school serving a disadvantaged population in Newark, N.J., a city devastated by riots, crime and low academic expectations. St. Philip’s was founded in 1988 in the Episcopal tradition and accepts children without regard for their ability to pay tuition. The School prepares children to succeed at selective boarding and day schools throughout the country. Several St. Philip’s alumni have graduated from St. Andrew’s. Over 90% of St. Philip’s graduates ultimately matriculate in college.

In 2005 Tom became Chief Administrative Officer, and was charged with managing the Academy’s $26 million construction project, arranging the tax-exempt bond financing, while leading the campaign, and successfully restructuring the School’s Finance Office. By January 2007, all 300 students celebrated their move into the newly renovated former chocolate factory, more than three times the size of the previous facility, and designed to meet LEED Silver standards. Enrollment has increased to 360 students, and the waiting list continues to grow. Tom is now Chief Advancement Officer in a development program which will raise over $3M for annual operations this year.

Tom lives in Montclair, N.J., with his wife, Diane, who is an accountant and is working towards an M.S.W. Their son, Phillip, teaches nursery school in Manhattan. Their daughter, Lauren, is a singer and actress in musical theatre (and holds three part time jobs!). Tom especially enjoys kayaking.