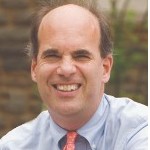 Tad graduated from Williams College in 1979 and joined the faculty at St. Andrew's as an English teacher, dorm parent and coach of soccer, basketball and tennis. Tad has coached state championship teams in both boys soccer and boys tennis.

During his 23-year tenure, Tad has focused on cultivating the School’s distinctive ethos and culture that inspire members of the community to seek and embrace a public good.

He has sought to develop and refine a teaching and learning philosophy that honors exemplary student work, exhibitions, and engagement. Because of the skill, intelligence, and creativity of the faculty and student body, the School sets academic standards not through the AP program but through establishing habits of mind and heart that lead to extraordinary expressions of student understanding and mastery.

Tad has sought to develop the School’s campus to provide an extraordinary setting for education of the mind and spirit; such work has included the O’Brien Arts Center, the Durkin-Fleischer Squash Pavilion, the Sipprelle Field House, the solar array, the organic garden, the renovated Amos Hall, the Facilities Building, the retention pond, and the nearby tennis courts.

In conjunction with his work at St. Andrew’s, Tad helped lead the formation of St. Anne’s Episcopal School in Middletown and teamed with former Governor Jack Markell to create the Delaware College Scholars (DCS) Program in the State. The DCS program supports the educational aspirations of promising low income students throughout the state. In addition to St. Andrew’s affiliation with St. Anne’s and DCS, the School participates actively in community service programs throughout the area, including a close relationship with Delaware Special Olympics.

Tad continues to teach in the English Department, focusing on the junior year class that enables him to work with students on transformational texts like Shakespeare’s Hamlet, Tolstoy’s Anna Karenina, Eliot’s Middlemarch and a wide variety of short fiction and poetry.

He speaks and writes extensively about school culture, educational reform, leadership, and diversity. He is the author of a chapter on Episcopal School leadership in Reasons for Being and co-authored a chapter on authentic learning at the secondary level in Transforming Undergraduate Education. He is a founding member of Theory to Practice, an undergraduate college initiative studying engaged learning, wellness and alcohol/drug use. He serves on the Board of Trustees of the S. Engelhard Center, a foundation exploring educational innovation at the college level. He is passionate about teaching, community, the work of Bryan Stevenson and the Equal Justice Initiative, civic engagement, diversity, and Buffalo sports teams.